The 2014 Winter Meeting in Orlando celebrated the wonder that is physics. The Orlando area is filled with excitement and magic—and the physics behind the magic, whether it’s space flight or thrill rides. Attendees were able to visit the Kennedy Space Center and some of the theme parks. 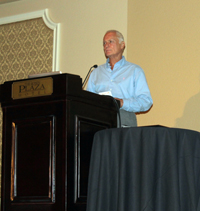 The Rosen Plaza, the conference hotel, was across the street from Pointe Orlando, a major dining, entertainment, and shopping complex. Harris Rosen, owner of the conference hotel and humanitarian director of the Harris Rosen Foundation, greeted attendees and welcomed them to Orlando. We enjoyed a taste of alligator bites and key lime shots in honor of our Florida meeting site as we greeted colleagues and visited exhibitors during the Saturday evening Opening Reception.

Attendees became familiar with the “polar vortex” that found its way as far south as Orlando causing some changes to plans, including those of Sunday’s plenary speaker, Don Pettit.  Pettit is a NASA astronaut who, while aboard the International Space Station, conducted out-of-this-world physics demos that appear as the 14-episode Science off the Sphere video series. Weather related travel cancellations made it impossible for him to attend the meeting. The APS team members, Becky Thompson and James Roche, were able to present information on Pettit’s work and shared some of his videos.

Sir Michael Berry received the Richtmyer Memorial Lecture Award recognizing his communication of the beauty of quantum mechanics to broad audiences. His lecture, How Quantum Physics Democratized Music, was an entertaining and historic look at connections between physics and technological invention and aspects of human life with examples ranging from music to the color of gold. At the end of the session AAPT member, Sharon Rosell from Central Washington University, received the SPS Outstanding Chapter Advisor Award.

Phillip Metzger, a NASA physicist and lab manager at Kennedy Space Center, spoke on Preparing Physicists for the Industrial Revolution in Space.  He projects that advances in robotics during the coming decades will revolutionize the human experience in many ways including explosive economic growth, resulting in a civilization that goes far beyond a single planet.  Physicists are already playing a central role and this expansion will make teaching physics more important than ever.

The Oersted Medal was presented on Dean Zollman on Tuesday. In his talk, Physics Education Research and Teaching modern Modern Physics, Zollman addressed the use of the term “modern” and the differences in perspective for older physicists and students who were born after 1995. When teachers consider teaching Modern Physics they are challenged with deciding what the content should be, how to adjust for the ever increasing information on how students learn physics, and the constantly changing tools that are available for teaching and learning. 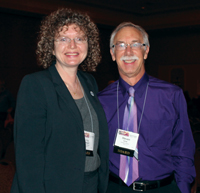 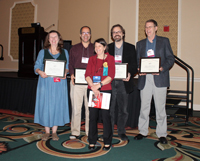 President Gay Stewart spoke about ways AAPT has grown and changed during her time as president then turned the gavel over to Steve Iona, the incoming president.

Later that day attendees participated in the annual Symposium on Physics Education and Public Policy. The 2014 Symposium was partially sponsored by funds contributed to the Memorial fund in memory of Mario Iona. Speakers Jan-Carlos Aguilar, Georgia Department of Education, and Paula R. Heron, University of Washington, provided an inside look at the process of policy making and discussed actions educators might take to contribute to decisions about policies affecting physics and STEM education.

Poster sessions are always popular and this Winter Meeting provided opportunities for posters as part of poster sessions, part of regular sessions, and part of the SPS Undergraduate Research and Outreach Poster Reception.

Continuing the tradition begun by Betty L. Preece, the Students Exploring Engineering and Science (SEES) Program provided a morning of hands-on learning for more than 100 students from minority, low socio-economic schools. The activities were under the direction of the Society of Physics Students.