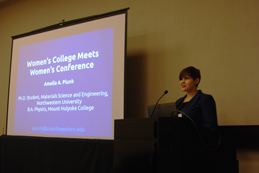 AAPT: Not Just for Teachers

When a former professor of mine asked if I would be willing to present at the American Association of Physics Teachers (AAPT) Winter Meeting I was honored by the request. When he mentioned that I would be speaking on a panel regarding the Conference for Undergraduate Women in Physics (CUWiP) I nearly jumped out of my skin with excitement. While I was certainly pleased with the prospect of attending a new conference, the idea of sharing with others the love I have for CUWiP was my true motivation for finding a way to get down to New Orleans. What I was not expecting, however, was to fall in love with AAPT in a way that was completely foreign to me.

I have attended several conferences in the past, but none quite like AAPT. Where the APS March Meeting is enormous, and can be overwhelming and consuming, AAPT is compact. Where CLEO is specific, with members attending from one small sect of physics, AAPT is attended by a diverse cross-section of the physics community. Where CUWiP is comprised of mostly strangers, it is hard to find anyone at AAPT who does not know a handful of other attendees, if not many, many more.

I admit that I took a slightly unconventional path towards immersing myself in the culture of AAPT’s Winter Meeting. While the standard talks, award sessions, and social events did not officially begin until Monday, I dropped in on the Meetings Committee early Sunday morning. Once I explained to the committee members that no, I did not teach physics at the high school or college level, no I was not interested just yet in joining the committee, and no, I was not even a member of AAPT, I endured several seconds of silence as the looks of surprise settled onto their faces. So why did I wake up at 6am on a Sunday to attend a meeting that in no way affected me? Because I wanted to see what made AAPT tick.

The answer is, as I repeatedly discovered throughout my time at AAPT, community. As the committee was discussing potential locations for the meetings in 2015 and beyond, I witnessed first-hand the power of networking. A member would point out that DC-area conferences were often well attended and three others would start throwing out potential contacts at various universities in the area. In an effort to reduce the costs for a bay-area conference it was suggested that the official conference hotel be further from campus than is typical. When someone brought up the issue of transportation, another was quick to suggest an email to the administration of an engineering department that frequently rents out campus transportation for the use of visiting students. There was no problem posed to the committee that didn’t result in some suggested resolution by the end of the meeting through the use of the collective network.

It was 7am the next morning when I attended the First Timers’ Gathering lead by members of the AAPT executive board, and my first AAPT meeting officially began. Along with fifty other newcomers I slunk bleary-eyed from door to breakfast buffet to empty seat, and sat staring at the swirls of cream in my first cup of coffee. Thankfully the members of the board had thought to strategically distribute themselves around the room so that they might stimulate introductions and inspire conversations. By the time Past President David Sokolov took the podium to greet the room, I had introduced myself to high school teachers from California, community college professors from Virginia, and graduate students in physics pedagogy from the Midwest.

After Sokolov’s warm welcome, John Hubisz, Jill Marshall, and Beth Cunningham each took the podium in turn to encourage us to reach out and make friends. An overwhelming emphasis was placed on the recommendation to get as involved in the AAPT community as possible — attend committee meetings, get involved in area chapters, and network, network, network.

“AAPT is an organization based on connections,” Cunningham informed us with a smile growing across her face, “and we need you, who are new to this world and have fresh ideas, to inspire us just as you need those of us who know the ropes to guide and assist you.”

Once the gathering ended I found myself meandering through morning sessions which touched on topics ranging from cultural (“History and Strengthening of Physics Departments at Historically Black Colleges and Universities”) to pedagogical (“Investigation and Assessment of Physics by Inquiry”) and contemplating strategies for getting the most out of the conference.

As I perused many of the marvelous vendor stands in the exhibition hall I stopped for a moment, examining a Chinese spouting resonance bowl alongside several AAPT veterans. All were staring with rapt attention at a demonstration of the bowl’s use for visualizing nodes. When the exhibitor finished and the last ringing notes of the resonance bowl had faded, eager chatter immediately surfaced with attendees throwing out questions regarding maintenance, ideas of other concepts that might be demonstrated, and shortcomings that other techniques don’t have. Remembering my favorite activity in high school physics I dove into the conversation, excitedly giving my two cents about wave tank labs. I found myself bombarded with questions about my high school physics experience; “What topics most inspired you?” “Why did you choose to study physics in college?” “What kinds of classroom activities are most inspiring and exciting?” They were almost as eager to learn from me as I was from them!

In the heat of our discussion one of the gentlemen announced that it was almost time for an award session and hurriedly left our circle. Slowly each member followed and I next found myself in an immense ballroom attending the presentation of the Oersted Medal, AAPT’s oldest continuous award, to Professor Joe Redish of the University of Maryland.

During his invigorating address Professor Redish discussed the theoretical framework in which physics education research should be viewed so that effective techniques can be developed. As I sat on the edge of my seat he asked me (for when Professor Redish is speaking to a room of people it truly feels as though he is having a conversation with you and you alone), “Why are our interactions with learners such a mess? Why are teachers as a whole so quick to put the word ‘wrong’ on an answer that may simply be framed differently than theirs?” And whether he knew it or not, his words framed my own experience at AAPT and inspired me to examine not only the flaws in my physics experience, but why I perceived them as such and how I could work towards enhancing my own continuing education.

Walking out of the award session with a spring in my step and inspirational words echoing in my mind, I directed my toes towards what will remain in my mind the most rewarding event of the conference: Speed Networking. Yes, it was exactly as you are imagining it: a room of tables, each with two chairs, and a five minute per conversation time limit. Whereas many of those in attendance were seeking cross-country connections and tips on how to propel their careers, my motivation was simply to gather more data in my ever-growing pool of information about what paths people took to land in the positions they hold today. I was far from disappointed. If I was allowed one wish for the progression of AAPT’s Winter Meeting it would be that this event should be repeated on a larger scale; the twelve-or-so “veterans” who were placed around the outer perimeter of the room represented an excellent cross-section of AAPT attendees, but I can envision nothing more exciting than a room packed to bursting with physicists hoping to make just one meaningful connection that would not have otherwise occurred. 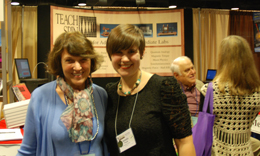 In fact the most valuable of all of my interactions was my introduction to Barbara Wolff-Reichert through David Maiullo, Rutger Physics’ “demonstrations guy,” at whose speed networking table I found myself first. When I saw Barbara enthusiastically showing off her company’s merchandise to curious onlookers I knew immediately that she and I would become fast friends. Having graduated from Swarthmore College in the early 70’s, she has long been an advocate for women in physics. After teaching at the high school level for many years she joined her husband (whom she met at an AAPT meeting) in the development of TeachSpin, an advanced laboratory instrument development company. Through my conversations with Barbara I gained a great deal of perspective regarding careers in industry. She was able to show me that through business one can affect the next generation of scientists in a completely different way than through academia. By making advanced laboratory equipment affordable and accessible she is helping to open pathways to a career in research that many students at smaller, less funded institutions might never have had access to.

It is my intense desire to inspire through this article students of physics to pursue conferences such as AAPT’s winter meeting. I know better than most that attending a conference with little to contribute can be intimidating at best and terrifying at worst, but you must remember that your most valuable assets may not lie in vast data sets, extensive research, or stacks of published articles. We are important in this community because we have all the time in the world ahead of us. In attending a conference and creating a network we allow the ideas of those who came before us to be developed and molded to fit into the framework of our generation, thus subtly strengthening the physics community from the bottom up.