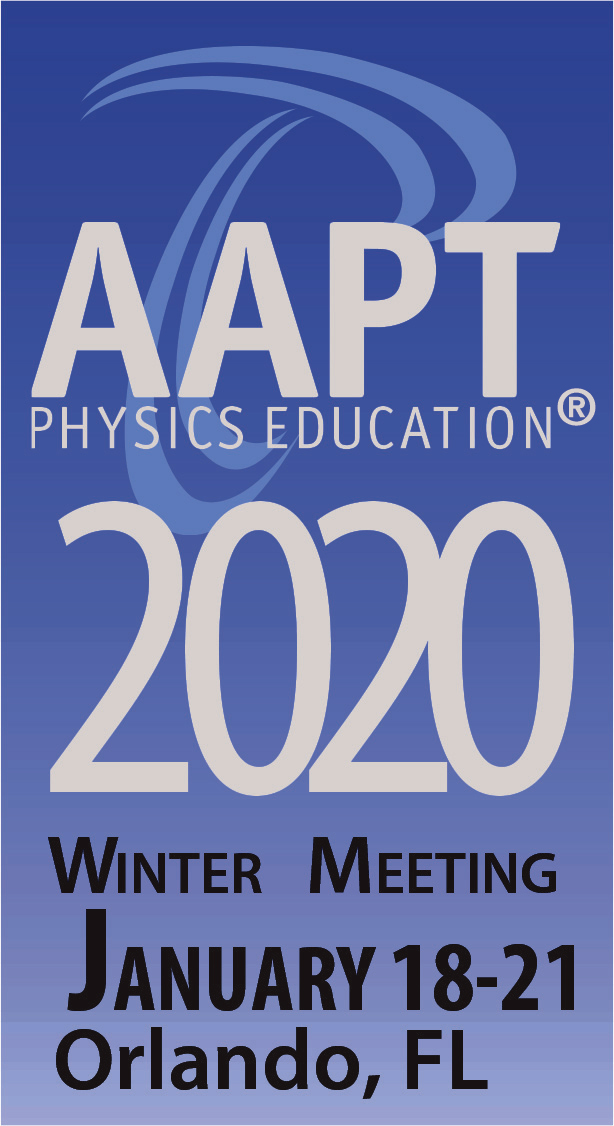 Special Thanks
AAPT thanks Anne Murdaugh, Ph.D from the Rollins College Physics Department for helping to organize the workshops.

The headquarters hotel for the 2020 Winter Meeting was the Caribe Royale, Orlando. 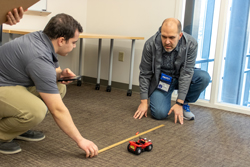 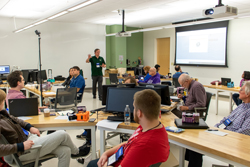 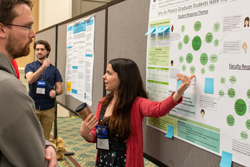 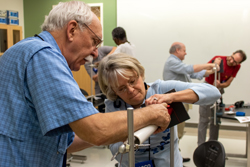 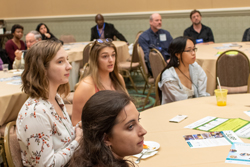 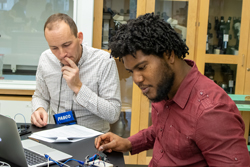 Attendees also enjoyed a variety of social opportunities such as the Early Career and First Timers' Social, Game Night, and a tour of the Kennedy Space Center that included a tour of the launch facilities and NASA Visitor Center where participants visited the new Astronaut Hall of Fame (from Project Mercury to the Space Shuttle Program), an Astronaut Encounter, and  the actual Saturn V Rocket. Every human who stepped foot on the Moon launched from Kennedy Space Center atop a Saturn V rocket.

Meeting of the Members

The 2020 AAPT Meeting of Members gave attendees the opportunity to learn about the governance and activities of their association. Secretary Blane Baker reported on the results of the 2019 AAPT National Election and the Nominating Committee for 2020. The Chair of the Section Representatives shared information regarding the activites of the sections and the AAPT Treasurer reported on the financial position of the association. Executve Officer, Beth Cunningham and President Mel Sabella presented information on the status of AAPT programs, including a conference on computational physics and the new books publishing program.

Time during the meeting was devoted to honor the memory of prominent AAPT members, Barbara Lotze, Frederick Reif, and Curtis Hieggeelke.

Jim Gates, Ford Foundation Professor of Physics, Brown University Sylvester James “Jim” Gates, Jr., (born December 15, 1950) is an American theoretical physicist. He received two B.S. degrees and a Ph.D. degree from the Massachusetts Institute of Technology, the latter in 1977. His doctoral thesis was the first one at MIT to deal with supersymmetry. In 2017, Gates retired from the University of Maryland, and is currently the Brown Theoretical Physics Center Director, Ford Foundation Professor of Physics, an Affiliate Mathematics Professor, and a Faculty Fellow, Watson Institute for International Studies & Public Affairs at Brown University. While at the University of Maryland, College Park, Gates was a University System Regents Professor, the John S. Toll Professor of Physics, the Director of the String and Particle Theory Center, and Affiliate Professor of Mathematics. Gates served on the U.S. President’s Council of Advisors on Science and Technology, contemporaneously on the Maryland State Board of Education from 2009-2016, and the National Commission on Forensic Science from 2013-2016. He is known for his work on supersymmetry, supergravity, and superstring theory.

Jonathan Smith provides oversight and direction throughout all phases of selection, design development, engineering procurement, installation, commissioning and on-going operation of amusement rides and devices for the 12 SeaWorld Parks. His most recent projects include Iron Gwazi at Busch Gardens Tampa Bay, Ice Breaker at SeaWorld Orlando, Emperor at SeaWorld San Diego, Texas Stingray at SeaWorld San Antonio, and Pantheon at Busch Gardens Williamsburg, all debuting in 2020.  Notable recent projects include Oscar’s Wacky Taxi at Sesame Place and Infinity Falls at SeaWorld Orlando. Jonathan started his career with SeaWorld Parks in 2012 as a project manager in the design and engineering department at Busch Gardens Williamsburg and Water Country, USA where he played key roles working on projects and attractions such as Verbolten, Tempesto and InvadR. Jonathan is a registered Professional Engineer and LEED Accredited Professional and holds a bachelor’s degree in Mechanical Engineering at the Ohio State University. 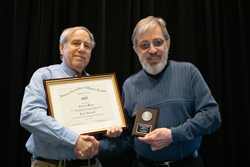 The 2020 Oersted Medal was awarded to David Sokolofft.  His talk was titled "If Opportunity Doesn’t Knock, Build a Door - My Path to Active Dissemination of Active Learning."  Sokoloff is Professor of Physics, Emeritus at the University of Oregon. He earned his B.A. at Queens College of the City University of New York and his Ph.D. in AMO Physics at the Massachusetts Institute of Technology. For over three decades, he has studied students’ conceptual understandings, and developed active learning approaches (with NSF and FIPSE support). These include Interactive Lecture Demonstrations (ILDs) and the four modules of RealTime Physics: Active Learning Laboratories (RTP), both published by Wiley and co-authored by Priscilla Laws and Ronald Thornton. His work has been published in the American Journal of Physics, the European Journal of Physics, Physical Review, Physics Education Research and The Physics Teacher. He has conducted numerous international and national workshops to disseminate these active learning approaches to secondary and university faculty. Since 2004, he has been a member of the UNESCO Active Learning in Optics and Photonics (ALOP) team, presenting workshops in more than 30 developing countries in Africa, Asia and Latin America. He is contributor to and editor of the ALOP Training Manual. The ALOP Team was awarded the 2011 SPIE Educator Award. He was awarded the American Physical Society (APS) 2010 Excellence in Physics Education Award (with Priscilla Laws and Ronald Thornton) and the American Association of Physics Teachers (AAPT) 2007 Robert A. Millikan Medal. He has been a Fulbright Specialist in Argentina (2011) and Japan (2018), is currently a member of IUPAP Commission 14 (International Commission on Physics Education), and has served in AAPT’s Presidential Chain (2009-2012). 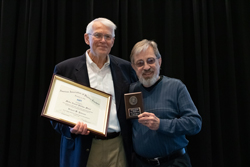 Richard W. Peterson, recipient of the Melba Newell Phillips Medal, is University Professor of Physics – Emeritus, Bethel University, St. Paul, Minnesota. His talk, "Changed . . . by a high and humbling calling” reflected his lifetime of experience.  Peterson has brought to AAPT’s executive level leadership a passion for experimental physics and its impact on the lives of students in high school, introductory and advanced laboratories. Following work with the AAPT Apparatus Committee (starting in 1976), he was NSF Principal Investigator for AAPT’s Lab Focus-‘93 that sought to reinvigorate all physics teaching lab experiences. Later he helped form the AAPT Laboratories Committee with its emphasis on encouraging more effective physics laboratories. While an AAPT leader, he worked with others in the formation of ALPhA (Advanced Laboratory Physics Association) as a charter ALPhA Board member - helping organize the first ALPhA national conference (2009) at the University of Michigan. He received the American Physical Society’s (APS) prize for outstanding research at an undergraduate school and was elected an APS Fellow in 2005. He was recognized with the Jonathan F. Reichert and Barbara Wolff-Reichert Award for Excellence in Advanced Laboratory Instruction in 2017.He served six years on the AAPT Executive Board as Secretary and four years (2003-2007) within the Presidential track - followed by three years as the first AAPT Meetings Committee Chair. His many years of dedicated and creative leadership have had a lasting impact on AAPT, how we do advanced labs as physics faculty, and on the lives of countless students. 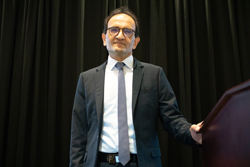 The AIP Science Communication Award was presented to Raman Prinja in the Writing for Children category for his Planetarium, published by Bonnier Books in the U.K. and Big Picture Press in the U.S. He is a professor of astrophysics and head of department at University College London, and his research has focused on the evolution and properties of the most massive stars in the galaxy and their progression into supernovae. Prinja has been awarded the Pol and Christiane Swings research prize as well as UCL faculty and department teaching awards. When he’s not teaching and researching, Prinja is an active public speaker and regularly presents lectures to a wide audience range. He has made it his personal goal to bring the subject of astronomy to more diverse audiences, including children, and has written over 20 successful outreach-level science books. 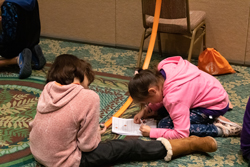 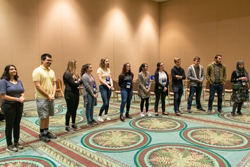 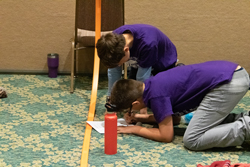 AAPT, together with the Society for Physics Students, AAPT hosted a The Students Exploring Engineering and Science (SEES) program. They welcomed at-risk students from Orlando area elementary schools to a fun filled morning of physics related science activities led by volunteers. The activity included transportation, lunch, career information, and science materials provided through donations to the Betty Preece Memorial Fund. 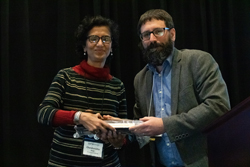