The first impression received upon arriving in Portland was how the physics of flight made it possible for us to almost shake hands with the summit of Mt. Hood.  After hours of looking at the earth far below us, our view was suddenly filled by this prodigious snow covered volcanic peak and it was breathtaking!

Founded in 1843 on the banks of the Willamett River, Portland was incorporated in 1851 and was home to 800 inhabitants, a steam sawmill, a log cabin hotel, and a newspaper, the weekly Oregonian.  The city’s location made it a favored port in the Pacific Northwest for much of the 19th century.  In 2010 Portland and Portland State University were perfect hosts for the AAPT physics education community.  Governor Theodore R. Kulongski declared July 18-24 Physics Education Week in recognition of the collective contributions of physics education and research to Oregon’s technology-based economy.

Prior to the meeting the Physics Teacher Resource Agents (PTRA) held a National Summer Insitute.  Workshops were held focusing on Engineering Design, Magnetism, Perimeter lnstitute Explore & GPS, E-mentoring, Amusement Park Physics, Energy Choices, and Radioactivity. David Vernier of Vernier Software & Technology hosted Physics and Engineering Education – Past, Present, and Future along with a tour of Vernier and a PTRA Group Picnic.  The 25th Anniversary of PTRA was celebrated as part of the Summer Meeting.

The Two-Year College community within AAPT hosted a special full day meeting on the campus of Portland State University designed to meet the needs of faculty serving physical science students in Two-year and Community Colleges. Nearly 40 educators enjoyed meeting with colleagues and being provided professional development from sessions on The Role of the TYC in Teacher Training, Adopting and Adapting PER-based Curriculum, Innovations in the Introductory Laboratory, and Creating a Virtual TYC Physics Community. 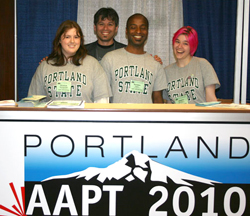 The Summer 2010 meeting was a resounding success; so much so that a motion was entertained to have the meeting in Portland every summer! There was universal agreement that the Portland State staff and students, and the AAPT meeting staff went well beyond the call of duty to facilitate the meeting.

The meeting included more than 40 workshops including hands on learning opportunities about Lasers, Astronomy, Physics Instructional Resource Association (PIRA) demonstrations, Modeling, and many other topics.  The workshops were held at Portland State University.  Attendees soon came to recognize the gray t-shirts with large green PSU lettering that, together with a smile, meant guidance around campus was only a few steps away.

5k Walk/Run, Columbia Gorge Tour, Walking Tour, and Pub Crawl
AAPT initiated a number of new networking events in response to attendee requests. The first annual AAPT 5k Walk/Run was a resounding success. Thanks are due to the volunteers who donated time to the event and to the brave troop of nearly 50 runners and walkers whose $20 race fee helped raise funds to offset the costs of the meeting. The weather was perfect and the Oregon scenery was beautiful. It was a great way to start the day and plans are underway to make the 5k Walk/Run an AAPT tradition.

No trip to Portland would be complete without a tour of the Columbia River Gorge.  This waterway cuts through basalt bluffs that rise up to 4,000 feet above the river and features breathtaking views of some 75 waterfalls, including Multnomah Falls, the highest waterfall in the Unted States.

Portland is known for its local breweries and attendees were able to get a taste of the local brews at the popular pub crawl on Sunday night following the Opening Reception. 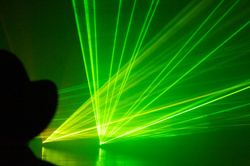 “WOW” and “best ever” were comments heard about the demo show, which took on a unique twist this year, with the Physics of Vaudeville. We had a hint of what was to come at the urban picnic; Portland rolled out the red carpet for us, shutting down an entire city block. Picnic goers were visited by giant walking flowers, cyclists on the smallest bicycle ever seen, and aerial ballet of streamers- and did I mention chamber of commerce picture perfect weather as promised?

The evening started with a 21 balloon salute to Dr. Warren Hein, retiring AAPT EO, and announcement of the photo and apparatus contest winners. That was followed by stunning performances by kite dancers, acrobats, jugglers, unicyclists, and a human pendulum, attached to a 40 foot silk streamer by friction alone with no net. The grand finale of the evening was a spectacular laser show sponsored by APS. Thanks go to Christine and David Vernier for sponsoring this enchanted evening and to Stanley Micklavzina for making the local arrangements!

Celebrating 50 Years of the Laser
APS/DLS Symposium on Laser Physics—This session was recorded and the talks can be viewed on UStream at http://www.ustream.tv/channel/2010-summer-meeting---portland-or.

Warren Warren, from Duke University, started his plenary address by thanking us for our appreciation of our plenary speakers; he had seen the “Thanks Warren!” ribbons and added his appreciation of the service Warren Hein has given to AAPT. His talk, Breasts and Brains, Similarities and Differences: Using Novel Physics to Enhance Clinical Molecular Imaging focused on the rapid growth of molecular imaging in biomedical science.

Femtosecond Optical Frequency Combs was the title of Steven T. Cundiff’s talk.  Steven is from NIST and University of Colorado. He discussed the basic concepts of femtosecond combs, their current applications, and their future possibilities.

Lasers and the Eye—Vasudevan Lakshminarayanan from the University of Waterloo talked about laser applications in ophthalmology and laser-tissue interaction, laser safety, and more recent work on photorefractive procedures

Celebrating 50 Years of Laser—This video had its screening during Laser Day.  A production of SPIE, the international society for optics and photonics, the video addressed the history of the laser and its current and future applications in medicine, material processing, communications, research, and astronomy.

Sessions of Note
Nearly every seat in the house was taken for the session on gender. This topic continues to be of great concern within the physics community. The Physics Education Research and Technology Education sessions had standing room only.  The High School Share-a-Thon was an extremely popular session as were the other interactive sessions.  Mentoring was also a hot topic and AAPT introduced a beta mentoring project to PTRAs for testing.

Awards
The awards sessions were recorded and the talks can be viewed on UStream at http://www.ustream.tv/channel/2010-summer-meeting---portland-or.

Millikan Medal—The 2010 Millikan Medal was presented to Patricia Heller, Associate Professor of Curriculum and Instruction at the University of Minnesota and a founding member of the Physics Education Research (PER) Group.  Her talk, Guiding the Future: Developing Research-based Physics Standards, focused on the questions physics educators need to address in the development of K-12 physics standards for college success.

Excellence in Undergraduate Physics Teaching Award—William P. Hogan, Professor of Physics at Joliet Junior College, was the recipient of the 2010 Excellence in Undergraduate Physics Teaching Award.  In his talk, “Stumbling on a Tightrope,” he talked about the professional struggle he faced in dealing with contradictory goals in his early teaching and the mistakes he made along the way to finding what works.

Excellence in Pre-college Physics Teaching Award—The recipient of the 2010 Excellence in Pre-college Physics Teaching Award was Diane Riendeau, a physics teacher at Deerfield High School, Deerfield, IL.  Her talk, “Who’s In?” focused on mentoring as the key to success in all phases of her career.  Being a mentor is a vital role that all physics teachers should play.  Being a mentee is equally important.  She challenged beliefs on the importance and benefits of mentoring relationships and encouraged the audience to respond to the question, "Who’s In?", with a resounding, “I am!”.

Distinguished Service Citations are presented to AAPT members who have provided extraordinary service to the organization.  The Summer 2010 recipients were Chris Chiaverina, Harvey Leff, and N. Sanjay Rebello.