Communicating Physics Outside the Classroom

Summer 2011 was a “hot” meeting in many ways! The temperature was either a pleasant break or a challenge depending on what part of the country you came from.

Omaha's Creighton University rolled out the red carpet, hosting AAPT and opening their beautiful campus to Summer Meeting attendees. Although the floodwaters of the Missouri River were visible from the air, the downtown area, including the Old Market, hotels, and Creighton University were unaffected.

Metropolitan Community College also opened its grounds to us, hosting a Two-Year College dinner at their historic Fort Omaha Campus. The dinner was originally scheduled on the patio of the President's house, but to avoid the heat and humidity of the outdoors, it was moved to the Bistro, a student-run restaurant in the new Culinary Arts building and conference center. After a brief tour of the new building, which includes many state-of-the-art spaces for teaching culinary arts, Ollie the Trolley took the group on a short tour of the historic Fort Omaha campus before returning to Creighton and the hotel.

The Run/Walkers had no problem with the warm weather. They started early and followed a beautiful course through Heartland of American Park, complete with swans and fountains, and then on to the stunning Kerrey Pedestrian Bridge, which led over the Missouri River to Iowa and back. Afterwards, students from Bennington High School treated participants to a healthy breakfast of bagels, fruit, and yogurt to start the day right. 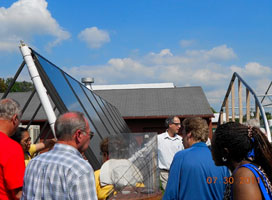 Throughout the meeting Creighton University hosted “Omaha Energy Tour,” a tour of their alternative energy installations, initiative, and shared ideas for developing curriculum around this critical and timely topic. The project is part of an NSF-sponsored initiative funded by a grant from the Department of Energy. It featured stops at sites with innovative sustainability projects  including: 1) tour of Creighton solar/wind facilities and overview of Creighton’s new energy technology major (http://energy.creighton.edu/),  2) Zero Net Energy House (Peter Kieitt Institute/University of Nebraska;(http://architecture.unl.edu/programs/research/ZNETH.shtml); 3) new Metro Community College alternative energy facilities and overview of their sustainability program; 4) and the research facilities of the Passive Solar Research Group at PKI/Univ of Nebraska). It highlighted the partnerships and shared access that are being developed between these institutions and the use of these facilities as a platform for public awareness and a resource for those interested in implementing alternative energies privately. 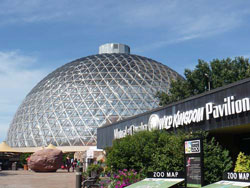 The tour of the world-class Henry Doorly Zoo was another highlight. The zoo delighted our attendees with its views of open jungle habitat viewed from the Sky-fari tram, a creatures of the night exhibit complete with swamp dwellers and bats, and a huge geodesic dome- with a desert inside!

The High School Physics Photo Contest, sponsored by Vernier, is always a favorite part of the event. Attendees were able to vote on this year’s winning entries. The "First-timers" day for high school physics teachers, featured special sessions on what AAPT has to offer. 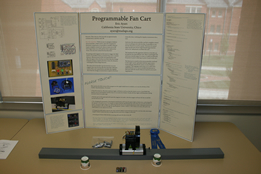 The Apparatus Competition, sponsored by the Area Committee on Apparatus and PASCO, continue to be a source of new inspiration.Whether developed to pique the interest of students, used in lecture and demonstration, or simply used to help teach physics in new or fascinating ways, teachers are continually engineering apparatus to aid physics instruction. The Apparatus Competition provides an opportunity for them to share their apparatus and receive recognition for their ideas. 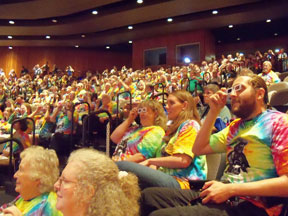 In his Millikan Medal talk, All I Really Need to Know About Physics Education I Learned in Kindergarten, Brian Jones shared the wonders of the Little Shop of Physics, toured by thousands of visitors during its most recent open house, and made some of its marvelous demos available for viewing on Tuesday afternoon.  As a surprise for Brian, his devoted colleagues from the Little Shop of Physics treated every audience member to a tie-dyed t-shirt, 3-D glasses, and a mini-UV laser. 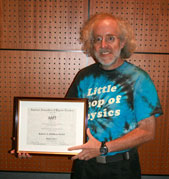 Jones was the 2011 recipient of the Robert A. Milikan Medal in recognition of notable and creative contribution to the teaching of physics.

The American Institute for Physics (AIP) presented the Children's Science Writing Award during the Opening Plenary.  This year's winner is Canadian author, Gillian Richardson for her book, Kaboom! Explosions of All Kinds. In the child centered approach to science Richardson explains how explosions are all around us. From the Big Bang to the pop of a seedpod, from solar flares to the explosive gases inside a car engine, they impact everyone.

Everyone complimented our area committees on the engaging and informative sessions they put together.
Spacetime Physics was memorable.  Aaron Titus felt that he was ‘touching history’- connecting the dots from the great moments in physics teaching to our own classrooms. The session was attended by over 100 people who stayed for all three presentations. A very lively discussion followed. All three speakers focused on how to teach relativity to audiences that are generally considered underprepared for this material.  Taylor talked about how John Wheeler influenced his teaching and showed how the principles of general relativity could be understood using the spacetime metric (rather than Einstein's field equations) together the principle of maximal aging.  Anne Cox described a 3-week seminar titled "Einstein for Everyone" taught at Eckerd College during the 3-week freshman orientation before the arrival of upper-class students.  Tom Moore described how he uses spacetime diagrams to reason intuitively about special relativity to avoid common errors and misconceptions. 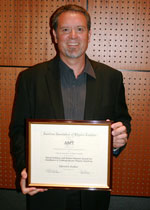 Edward E. Prather was recognized with the first David Halliday and Robert Resnick Award for Excellence in Undergraduate Physics Teaching. John Wiley & Sons is the principal funder of this award through its donation to AAPT.  Prather's talk, Teaching Space Science: A STEM Transformation Vehicle that Really Works, shared a decade of experience working closely with hundreds of college instructors, postdocs, graduate students, and undergrads in collaborative projects designed to understand issues of teaching and learning in college-level general education space science courses. The research results from these collaborations have been used to transform classrooms all over the country, creating learning environments that can significantly impact learners' science literacy and engagement in STEM.

The Paul W. Zitzewitz Award for Excellence in Pre-College Physics Teaching was awarded to Stacy McCormack. Her talk, Blond Girls Can't Learn Physics, addresses the way she overcame stereotypes and became a physics teacher. Stacy designed a guided-inquiry style high school physics class at Penn High School in Mishawaka, IN, that is lab-driven, student-centered, and uses numerous formative assessments to guide student learning. Now the 2011 Indiana State Teacher of the Year and an online adjunct instructor of Astronomy, Physics, and Physical Science classes for Ivy Tech Community College in South Bend, IN, Stacy shares her inexpensively created labs in a book for physics teachers titled "Teacher Friendly Physics." Amazingly, each year hundreds of high school students now find success in physics under the guidance of a blond girl.

The APS Division of Condensed Matter Physics contributed a session on Frontiers in Nanoscience. Plenary Speaker Barbara Jones shared her Perspective on the Future of Nanotechnology- and stayed for the SPS Award Session where she discussed research with students and helped to model the solar system with Spandex. Jeremy Levy gave an insightful talk on Etch-a-Sketch Nanoelectronics, using the childhood toy to illustrate state of the art advances.

The Poster Sessions are usually very popular and this year's sessions were no exception.  Nearly 200 posters were presented in AAPT and SPS sessions.  Topics covered ranged from Astronomy to Upper Division and Graduate Education.

Another “hot” session was Research on Undergraduate Mathematics Education, which was still being talked about into the PERC. There were a lot of questions, all very friendly and thoughtful. One physics education researcher said that this was one of the “best external (non physics education) sessions they have seen in a long time, and that the talks hit the right level - not jargon-filled and unapproachable, which is very difficult to do.” An attendee reported that, personally, "this meeting is now all about this session."

There were many other great sessions. In Physics of Sports we learned the easy way to tell the direction of the force on a backspinning baseball (no cross products needed.) It seemed that half the audience was taking pictures of Alan Nathan’s slide with the url for his trajectory calculator. At the Science and Society session those of us with a passion for sewing were pleased to learn that the fifth monograph ever issued by the National Education Agency was dedicated to the physics of the sewing machine- and we can still use it to teach physics today. The Indigenous Astronomy session was truly interactive, with Native American elders in attendance. The audience shared stories of the stars, including the memorable "Women Who Loved Onions More than Their Husbands."

In the Big Bang Effect, sponsored by Women in Physics, we got tips on how to not be “Such a Scientist! (Talking Substance in an Age of Style)” and learned that not all evil geniuses are alike. We also had opportunities to discuss the hot-off the-presses NRC A Framework for K-12 Science Education: Practices, Crosscutting concepts, and Core Ideas, at both an impromptu feedback forum with over 30 in attendance and at a well attended session, where Patricia Heller provided an excellent overview of the issues.

Wednesday had some great PER sessions bridging to the Physics Education Research Conference, including one on PER in the High School, which featured high school teachers doing exceptional research in conjunction with the Colorado learning assistants program. Another very interesting Wednesday session was dedicated to cheating in physics homework assignments, its consequences and ways to minimize it.

All of the plenary sessions were ‘sizzling,’ from Jim Stith’s excellent opening talk, which issued a challenge to us all to become better communicators of science with the public, to James Hansen’s standing room only Klopsteg lecture Halting Human-made Climate Change:The Case for Young People and Nature, on Wednesday. We opened an over-flow room to accommodate the large number of local attendees, many from 350.org, an international organization founded to address the issue of global climate change and named for 350 ppm, the upper limit Hansen advocates for C02 in the atmosphere.

It was a “hot” meeting from start to finish!