Additionally, much of the business of AAPT took place at this meeting with Executive Board meeting several days to receive reports, consider recommendations, and provide direction to the association that will strengthen our community as we move to enhance physics education and inspire physics educators.  The official AAPT Diversity Statement was just one outcome from their endeavors.  Many of the attendees were also about the business of AAPT serving in roles such as Area Committee members and Section Representatives.  They met to share information and plan new initiatives that will benefit the association and the larger physics community.

Early attendees were able to participate in workshops such as “Teaching Physics for the First Time,” “Seeing the Invisible (NASA),” “Reaching, Teaching, and Keeping Underrepresented Groups in Physics,” and “Open-Source Tutorials:  PER-Based Instructional Materials with Resources to Facilitate Modification and Implementation.”  Workshops were hosted at Walter Payton College Prep thanks to the efforts of Chicago member, Sam Dyson. Another offsite workshop took participants to the Chicago Museum of Science and Industry where they gained inspiration and strategies for teaching physics and developing outreach activities at the largest science museum in the western hemisphere.

AAPT and AAAS attendees enjoyed a tour of the Fermi National Accelerator Laboratory (Fermilab), the nation’s premier particle physics laboratory. Participants received a guided tour of some parts of the laboratory and got to see firsthand the facilities in which several important discoveries in particle physics have been made.

Poster Sessions continued to be very popular and were presented at two separate times with presenters available to answer questions for 1/2 hour during each Session.  Saturday posters addressed Curriculum and Laboratories, Energy and the Environment, and Astronomy and Astrophysics.  Sunday posters focused on Assessment and Physics Education Research Issues.

Popular Paper sessions included “PLANCK:  Looking Back Toward the Dawn of Time,” “Phascination in Physics—Dr. Donaldson’s Haunted Physics Lab,” “What Influences the Interests of Girls for Physics,” “Fighting Wrong Beliefs,”  “Women and Men of the Manhattan Project:  The Legacy of Wartime Physics in Chicago,” “Help for Your Classroom at the Physics Classroom,” and “Make and Take Physics Equipment.”

The Demonstration Show, hosted by Tom Senior and Chicago area members was a “Standing Room Only” event featuring a brass band and a pirate band.  Attendees were welcomed to the event by Young-Kee Kim, Deputy Director of Fermilab and Professor of Physics at University of Chicago then led through a series of Physics Demonstrations including Newton’s Cradle with bowling balls, Bed of Nails, Whistling Tube, and Light Diffusion.

The Symposium on Physics Education, Early High School Physics: Building a Foundation for Understanding the Sciences, presided over by Leon Lederman provided attendees the opportunity to learn from a panel of Physics Education experts on the importance of “Physics First” in high school science programs. 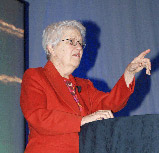 Vera Rubin’s Richtmyer Award address, Rotating Galaxies and Dark Matter, reviewed the history of our growing body of knowledge about the universe from Galileo’s discovery that Jupiter has orbiting moons to our understanding today that the universe is populated by billions of galaxies and those galaxies are moving away from each other.  We also now know that everything evolves; stars are born, evolve, and die; and the stars, galaxies, and clusters of galaxies we can see make up only 5% of the universe’s matter.  The remaining dark matter is only detected by its gravitational effect on bright matter.

“The History and Fate of the Universe” was the title of George F. Smoot’s Oersted Medal Presentation.  Using our most advanced instruments and techniques we are able to understand the evidence surrounding the birth and development of our universe and provide a direct image of the embryo universe.

AAPT members were invited by AAAS to participate in a special invited plenary by Albert Gore on global warming.  Using the session as an opportunity to urge the scientific community to communicate the urgency of climate change to political leaders and the public, he noted that humanity has little time to change course before risking disastrous global consequences.  He welcomed the signs of change in the United States but, he said, scientists must use their knowledge and their respected status in the community to press for broad, swift changes in energy and environmental policies.

"I believe in my heart that we do have the capacity to make this generation one of those generations that changes the course of humankind. The stakes have never been higher," Gore told the scientists, educators, students, and journalists in the audience.

The Winter Meeting concluded with the passing of the gavel from President Lila M. Adair to President Alexander K. Dickison.  Members expressed appreciation to President Adair for her leadership among emerging opportunities.