Gorgeous, crystal clear winter weather greeted us as we arrived in Jacksonville. This was Dr. Beth A. Cunningham's first meeting as AAPT's new Executive Officer. She was introduced to the attendees by former AAPT President, Lila Adair. She expressed thanks to Dr. Warren Hein and to all who helped her prepare for this new role. The full text of her remarks is available on aapt.org. 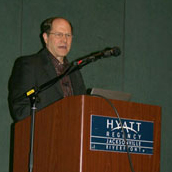 AIP Executive Director, Fred Dylla gave the Opening Plenary in celebration of the meeting theme, 100 Years of Nuclear Physics. His address, Ernest Rutherford and the Accelerator: "A Million Volts in a Soapbox," set against the backdrop of a century's progress in nuclear and particle physics, presented the extraordinary range of applications for the planet's more than 30,000 accelerators, not only in discovery science, but in medicine, industry, energy, the environment, and national security. Thanks to Dr. Dylla for making his presentation available.

The meeting highlights began on the first day with the University of Florida Proton Therapy Institute Tour. Attendee Mary Lowe reports that this is the Southeast’s only proton therapy center and one of a few clinical and research centers in the US. It provides proton therapy and conventional radiation cancer treatment. Dr. Zuofeng Li, Physics Director, gave an excellent tour of the facility by describing the principles of proton therapy, comparing it to X-ray treatments, explaining the clinical aspects, and showing the cyclotron, beamline, and patient rooms. Dr. Nancy Mendenhall gave an excellent plenary on State of the Art Nuclear Medicine: Proton Therapy on Wednesday.

The workshops also went well on Saturday. Local organizer and Jacksonville University Physics Department Chair, Paul Simony said, "My only regret is missing out on being able to attend the workshops myself. They appeared to be quite useful and I'm sure the participants got a lot out of them. I'm now even more impressed by the effort that the various presenters put in to helping colleagues with new techniques or to improve pedagogy." 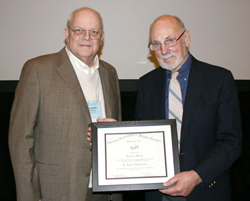 The 2011 Oersted Medal was presented to James Rutherford, UC Berkeley. His talk, The Particle Enigma, High School Physics, and the Search for Scientific Literacy, focused on physics as essential for achieving scientific literacy, a requisite of the general education of all students. He was joined by Galileo's interlocutors from the Dialogue Concerning the Two Chief World Systems: Salviati, Simplicio, and Sagreda. 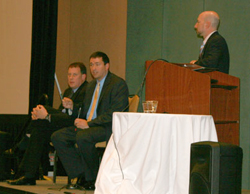 Another last minute windfall was an opportunity to bend the ear of Michael Lach, head of the US Department of Energy STEM initiative, who requested ideas from high school teachers at a special roundtable discussion.

Lach was part of the excellent Symposium on Physics Education, Education Policy: Having an Impact, Improving the Landscape, Tuesday afternoon. Stephen Pruitt, Vice President for Content, Research and Development for Achieve shared the Symposium podium with Lach as they discussed the direction of current education policy and took questions from the audience.

We did have one rainy day but the showers had moved on by the time of the Run/Walk. We had nearly perfect running weather and 20 runners and walkers enjoyed a beautiful view as we crossed over the Jacksonville River on the Main St. drawbridge and back on the Acosta Bridge.

Unfortunately, we did not get interrupted by the Main St. drawbridge; many of us had hoped to see it in action up close. Bo Hammer was first in, with Brian Pyper close on his heels. Thanks go to the Jacksonville Track Club runners who escorted us on the Run/Walk. We’re looking forward to another bridge run in Omaha!

We learned so much from the sessions at this meeting! Session AI, Statistical Analyses of Complicated Data was an extremely informative session where we learned the answer to the eternal question: Should all statisticians be Bayesians? [Answer: Yes, if they do not want to be eaten by tigers.] We also got excellent tutorials on sequential linear regression (and what it can tell us about self efficacy and gender) and how to do factor analysis (the right way.)

From Session BH, Heliophysics, the Heliosphere and ATST, we learned to think of the solar magnetic field as a carpet by analogy, and that the Sun’s magnetic field is the "dark matter of the sun," despite recurring claims that its nature has been finally understood. We also learned that solar eruptions could be compared to the Chinese bowl we had seen at the Spectrum Techniques booth, itself one of the highlights of the Exhibit Hall. And if we have more questions, we can Ask Mr. Sunspot!

The Minority Bridge Program Crackerbarrel was also a big hit, with 30 attendees. At the crackerbarrel, a brief overview of the APS Minority Bridge Project was presented, followed by a lively discussion of issues that such programs face.  Faculty members from several minority serving institutions and doctoral granting institutions were present, and considerable enthusiasm was expressed about the benefits of such a project, as well as questions of how to insure inclusiveness. 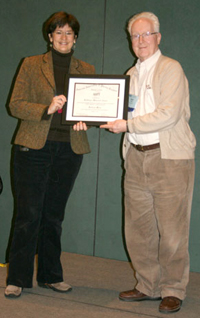 The Richtmyer Memorial Award was presented to Katheryn Moler, Stanford University. Her talk, Quantum Whirlpools: Tiny Vortices of Tireless Electrons, explained what it means to say that electrons are "Wavelike," how we know that they really are, the conceptual difference between wavelike electrons vs wavelike multielectron states, and why the wavelike nature of the superconducting state means that quantum votices could exist.

Marie Curie (alias Susan Marie Fronczak) had to brave winter snow and flight cancellations to join us in Jacksonville. Susan Marie gave a truly memorable performance Tuesday night as the great physicist herself.

Rutherford and nuclear physics figured prominently throughout, K. Lee Peddicord of the Texas A&M Nuclear Power Institute,enlightened us about Nuclear Power: Breeder Reactors and Beyond and on Wednesday afternoon there was a session on "Rutherford: His Life and Legacy." From beginning to end this meeting proved to be a fitting tribute to 100 years of nuclear physics.