Orlando's Wet N' Wild water park is the first water park in the world. It is also one of the few water parks that can stay open 365 days of the year! — www.mydestination.com

Due to inclement weather our plenary speaker Don Pettit is unable to join us in Orlando on Sunday, January 5 from 7:30 a.m. to 8:30 a.m.

The newly scheduled is plenary talk is entitled, "The Making of 'Science off the Sphere'" which will be presented by Becky Flagg-Thompson and James Roche. 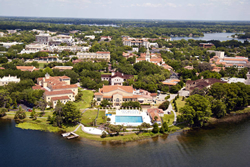 The 2014 AAPT Winter meeting will be held at the Rosen Plaza Hotel in Orlando, Florida with weekend workshops hosted by Rollins College.

This year's Winter Meeting will have a fresh, new four day meeting format from Saturday, January 4 - Tuesday, January 7, 2014.  Workshops will be held on Saturday and Sunday with the exhibit hall opening Saturday evening.  Sessions and Topical Discussions will be held on Monday and Tuesday with committee meetings scheduled throughout the meeting.

The Magic of Physics

More than 50 years ago the futurist and science fiction writer, Arthur C. Clarke, proposed what has been become known as his third law.  "Any sufficiently advanced technology is indistinguishable from magic." Imagine the reaction of someone from 200 years ago suddenly finding themselves at Kennedy Space Center or in one of the Orlando theme parks. It is a place filled with wonder, excitement – and magic. There is physics behind the magic, be it space flight or thrill rides. The 2014 Winter Meeting “The Magic of Physics” celebrates the union of Physics and Orlando – the wonder and excitement that is physics.

This meeting offers an excellent opportunity for members, colleagues, and future physicists from around the world to participate in physics workshops, meet and greet other physics educators, form networks nationally and locally, engage exhibitors and learn about the latest physics resources.

We look forward to seeing you in Orlando!

Some photos courtesy of visitorlando.com