Highlights of the 2015 Winter Meeting

As Nobel Laureate, Ahmed Zewail put it, "Light is life." We started 2015, the International Year of Light, in sunny San Diego with the AAPT Winter Meeting, filled with workshops, engaging sessions on a variety of topics, posters, plenary talks, awards, and special events. The exciting and invigorating four day program was designed to meet the professional development needs of physics, astronomy, and physical science teachers of all levels.

Eugene G. Arthurs, SPIE CEO spoke on "How Light Has Changed Our Lives," noting that our existence and evolution have depended on and been shaped by light from the Sun. During 2015, The International Year of Light, SPIE hopes to get a better sense of how much we rely on light and the rich promise for future masters of light.

At a special meeting of the AAPT membership attendees voted to approve a resolution to allow AAPT to base results of elections held electronically on an affirmative majority of those voting and to update AAPT 's Certificate of Incorporation to be in compliance with New York State law.

AAPT Area Committees from the Committee on Apparatus to the Committee on Women in Physics planned an outstanding programs of session, workshops, tutorials, and topical discussions.  The Poster Sessions were a popular venue for learning and networking.  Attendes participated in 3 AAPT Poster Sessions and 1 Session sponsored by the Society of Physics Students. 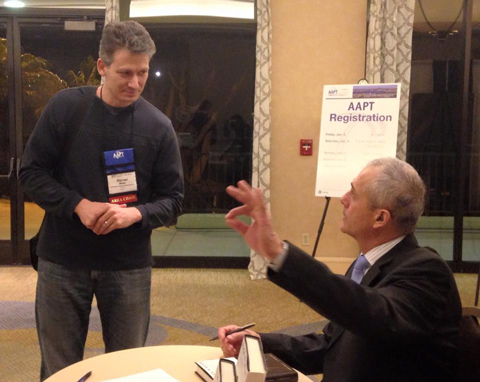 The first plenary speaker, Adrian Bejan, J. A. Jones Professor of Mechanical Engineering at Duke University, spoke on "Evolution, Life, and Sustainability, as Physics—What the Constructal Law is, and how it give us a new worldview." Bejan signed copies of his book on Constructal Law following the session.

Committee-sponsored and Commercial Workshops had topics ranging from Teaching Physics for the First Time, Fun and Engaging Physics Labs through Astronomy and Physics Simulations and more. Area Committees planned and organized more than 60 sessions covering topics relating to each committee's mission such as Best Practices in Education Technology, Biophysics Labs Beyond the First Year, and PER: Student Engagement and Metacognition.

The Exhibit Hall was very popular for attendees and opened Saturday night during a reception. Sunday was the new Support Your School Day by wearing a shirt from your alma mater. Also Sunday was High School Physics Teachers Day when teachers can attend for the first time at a reduced rate and enjoy special activities, including a luncheon.

During the 2015 AAPT Winter Meeting we hosted our first Fitness Challenge. Attendees were provided with pedometers to track their steps throughout the meeting. By the end of the challenge, 54 attendees shared their results;they walked 610,700 steps or approximately 305 miles, which is almost as far as from San Diego, CA to Las Vegas, NV.

Thomas L. O'Kuma of Lee College, Baytown Texas, was awarded the Melba Newell Phillips Medal in recognition of his creative leadership and dedicated service that have resulted in exceptional contributions within AAPT. His talk, Growing with AAPT, reviewed this long association with AAPT and the many leaders who were formational to his career. He included programs like Spin-Up and the TYC21 projects which played a role in the increased number of students taking physics and in the number of physics degrees awarded since the 1980s.

The 2015 Oersted Medal was presented to Karl C. Mamola in recognition of his significant contributions to physics education through his roles as editor of The Physics Teacher and as mentor for students, prospective authors, column editors, reviewers, and others. Mamola's talk, AAPT, TPT and Me reviewed his years working to maintain the quality and integrity of the journal while positioning it to be relevant moving into the 21st century. 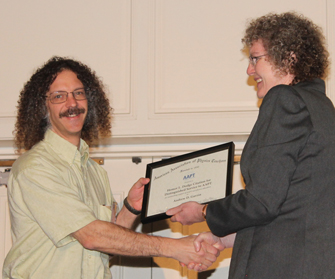 Andrew Gavrin, Associate Professor and Chair of the Physics Department at Indiana University-Purdue University Indianapolis (IUPUI), has served as AAPT Chair of the Committee on Physics in Undergraduate Education, as a member of the Undergraduate Curriculum Task Force, and as a member of the Programs Committee. His AAPT service includes the Committee on Educational Technologies (2005-2006), Nominating Committee (2008), Advisory Committee for Photo Contest (2009-present) and Video Contest (2009-2010), Special Projects and Philanthropy Committee (2012-2014), and the Committee on Instructional Media (2000-2002). A member since 1997, Gavrin has been a fixture at AAPT meetings for almost 20 years. During that time he has given numerous presentations. His committee service has given him the opportunity to organize numerous sessions contributing to the overall quality of the meetings.

Cook, retired Professor of Physics and Philetus E. Sawyer Professor of Science at Lawrence University has served as AAPT Vice President, President-Elect, President, and Past President, as Chair of the AAPT Meetings Committee. His service to the association includes more than four decades of leadership on committees, and representing both AAPT and the AIP Governing Board. He revised the AAPT Executive Board Manual, and was the impetus and leader of the advisory group that worked with staff to develop AAPT's online program for planning meetings, from abstract submission through the paper sort, to export into the final meeting program.

Elizabeth C. (Tommi) Holsenbeck, Physics Specialist for Alabama Science In Motion, Alabama State University Region, 2006-2014, was recognized for her work with PTRA and the AAPT High School Physics Photo Contest. Her service to AAPT includes Secretary/Treasurer of the Alabama Section 2007-2015, Coordinator of the High School Physics Photo Contest 2011-2015, Chair of the Committee on Physics in High Schools 2013-2015, Friend of the Committee on Educational Technologies, and Friend of the Pre-High School Committee.

Elisha Huggins was an early pioneer in the use of computers as physics instructional tools. He has authored a number of introductory physics textbooks including Physics 2000 which promotes the teaching of special relativity in the first week of an introductory physics course. Professor Huggins is also the developer of the award-winning software program MacScope which allows a computer to be used as a powerful storage oscilloscope. He has demonstrated the features of MacScope, as well as Physics 2000, in commercial workshops at numerous national AAPT meetings helping physics teachers make modern physics a part of introductory physics courses. The scalar field term, which now plays a major role in conformally invariant field theories, was named the "Huggins term" by Murray Gell-Mann. His AAPT service includes contributions to American Journal of Physics and The Physics Teacher, commercial workshops at Summer and Winter meetings where he presented his innovative teaching ideas, and Sustaining Membership in the Association since 2000. He currently serves as a member of the editorial board of The Physics Teacher. 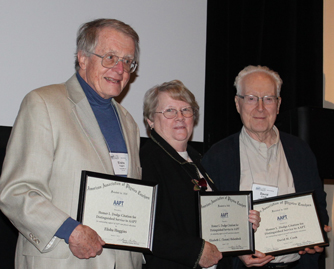 The AAPT Symposium on Physics Education and Public Policy brings together individuals who play pivotal roles in helping to shape policies and who provide information to policymakers. The 2015 symposium speakers were Shirley Malcom, Education and Human Resources Programs at the American Association for the Advancement of Science (AAAS) and Lee L. Zia, Deputy Division Director of the Nations Science Foundation.

The leadership of AAPT was transferred during a final general session in which President Steven Iona presented the gavel to incoming president, Mary Elizabeth Mogge. Iona's address included an Infomercial about the association that can easily be shared with colleagues and in section meetings. 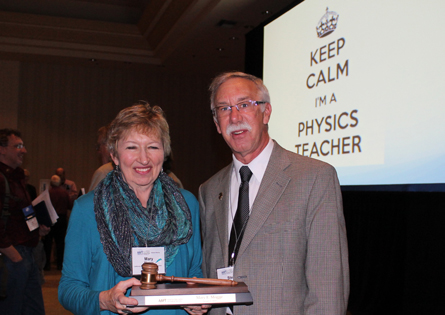 Presentations are being collected and archived at http://www.aapt.org/AbstractSearch/

More photos can be found at on the AAPT Flickr site.