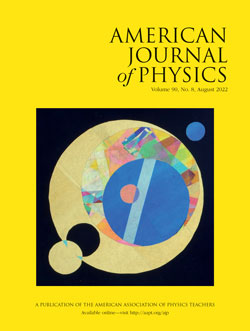 The array of colors and patterns seen when birefringent materials are inserted between polarizers is a source of amusement, popular science demonstrations, and art. This phenomenon of polarization-filtered coloration is commonly but misleadingly referred to as “interference colors,” despite not arising from the effects of interference. In this work, I clarify the link between polarization filtering and the observed colors and demonstrate how various aspects of birefringence in common household films provide opportunities and challenges for their use in art Volume 90, Issue 8, August 2022

A simple and low-cost experimental method to determine the thermal diffusivity of various types of foods by Lisa R. Wang, Yifei “Jenny” Jin and Jian Jim Wang. DOI: 10.1119/5.0087135
If you're looking to create an engaging discovery laboratory, you should read this paper! After using a vegetable peeler to carve foods such as potatoes or radishes into spheres, students can insert a thermocouple sensor and suspend the vegetable in boiling water. By measuring the center's temperature as a function of time for different size spheres, students discover how the time constant depends on radius and can also fit their data to a model to measure the thermal diffusivity of the food.

Skier and loop-the-loop with friction by Dominik Kufel and Alan D. Sokal. DOI: 10.1119/5.0095150
When particles slide with friction along a circular track, the sign change in the differential equation that results from the direction of the curvature has significant effects on the behavior of the solutions. The differential equations are solved analytically for these two problems and their behaviors are explored at a level appropriate for an undergraduate mechanics course.

Perihelion precession in power-law potentials: Hénon's theorem by V. Dmitrašinović and Marija R. Janković. DOI: 10.1119/5.0080691
While many physicists might believe that orbits have been fully understood since Newton's time, there are still new insights to be gained. In 1977, Michel Hénon presented a remarkable theorem for N-body orbits relating the precession, energy, angular momentum, and the power law of the potential. This paper presents this theorem in a simplified form for two-body interactions and is appropriate for undergraduate mechanics courses.

Exam problems that link physical concepts with electrical phenomena in living cells by Vadim Shlyonsky, Bertrand de Prelle, Florian Bodranghien, Don Patrick Bischop and David Gall. DOI: 10.1119/5.0075228
Every year, thousands of students intending on careers in the health sciences take physics classes. Problems that illustrate applications of physical concepts to living systems reinforce the power and relevance of physics for these students. This paper presents a collection of 15 examination problems given to undergraduate life-sciences students at the Faculty of Medicine of the Université libre de Bruxelles in Belgium. The problems cover physical/electrical principles underlying membrane phenomena in living cells such as electrodiffusion, modeling cells as RC circuits, ion currents, and the Hodgkin-Huxley model of cell voltage excitability. While the students for whom these problems are intended have already had a year of introductory physics, they may be of interest to instructors in introductory-level courses who wish to include problems involving cellular phenomena. Complete solutions are provided in the online supplemental material.

Nonlinear coupling in an asymmetric pendulum by Qiuhan Jia, Yao Luo, Huijun Zhou, Yinlong Wang, Jianguo Wan and Sihui Wang. DOI: 10.1119/10.0010391
A two-dimensional pendulum suspended from a flexible rod can trace out a visually appealing stationary pattern. The nonlinearity induced by the supporting rod can be treated as a perturbation if the rod is sufficiently stiff, allowing for a controllable analytical approximation. The analytical results developed in this article are compared to numerical simulations and experimental results. Mechanics instructors will find this setup provides both an instructive class demonstration and fertile ground for student exploration of nonlinearity.

On the nonlinearity of a tuning fork by Lintao Xiao, Chenyu Bao, Qiuhan Jia, Haoyang Wu, Huijun Zhou, Jianguo Wan and Sihui Wang. DOI: 10.1119/10.0011387
The technique of double-grating Doppler interferometry is introduced to measure the oscillation amplitude of a tuning fork. Due to a non-linear restoring force, the resonance frequencies shift as the amplitude changes, and these resonant frequencies exhibit hysteresis as the amplitude is cycled. These experiments could be implemented in an optics or acoustics lab or in a more general advanced laboratory course.

Painting in polarization by Aaron D. Slepkov. DOI: 10.1119/5.0087800
Birefringence is not only an interesting physics phenomenon with important practical applications such as identifying samples in mineralogy. It can also be used for art. This article encourages you to explore the colors that can be created when everyday birefringent materials (such as adhesive tape, film wrap, or transparent cutlery) are placed in between a polarizer and an analyzer. This art technique can become a nice student project or can be inserted into an inexpensive undergraduate optics lab. And, who knows, maybe one of your students (or yourself!) will be the next Michelangelo of polage (polarization painting).

Using a smartphone camera to explore ray optics beyond the thin lens equation by M. C. Sullivan. DOI: 10.1119/5.0090854
Have you ever wondered how a camera fits inside a smartphone? The thickness of the camera limits the focal length to a few millimeters, and there are design challenges due to the need to minimize aberrations, focus on objects at a large range of distances, and allow a wide image collection angle. It turns out that a simple analysis assuming thin lenses can explain much of the imaging system, and this analysis could be performed by introductory optics students. However, there are many interesting complications of the compound lens system that can be studied by more advanced students. This paper shows how to use a smartphone camera as an optics lab at a wide range of levels.

Quantitative measurement of birefringence in transparent films across the visible spectrum by Aaron D. Slepkov. DOI: 10.1119/5.0087798
An affordable experimental setup to measure the wavelength-dependent birefringence of thin polymer films is presented. The setup includes an incoherent incandescent light source and portable spectrometer, allowing film characterization across the visible and near-infrared regions. Acquisition and analysis of data from this setup are demonstrated on six common household polymer films, including kitchen wrap, cellophane, and adhesive tape. In addition, the optical thickness is obtained on films that exhibit concomitant thin-film interference effects. The work described here offers an accessible project on polarization optics for the undergraduate instructional laboratory.

A simple setup for the determination of the cosmic muon magnetic moment by Damir Bosnar, Mihael Makek and Zoran Matić. DOI: 10.1119/5.0077280
A low-cost experimental setup to measure the magnetic moment of cosmic muons is presented. Two significant modifications to previous such experiments are introduced in this approach: Reduction of the detection system to just a single scintillation detector and simplified electronics for signal processing and data acquisition. Experimental results are analyzed based on the provided theory, yielding an accurate value for the muon's gyromagnetic ratio. The work described here offers an accessible particle physics project for the undergraduate instructional laboratory.