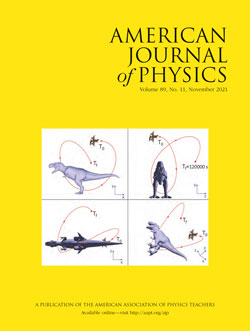 compulsory schooling system and sometimes even ignored at the university level. This omission is due to the complexities encountered in extending Newton's law of gravitation to bodies that are not spherical. However, a deep understanding of the link between the gravity and the shape is quite important to interpret some basic facts of nature. In this paper, we show how simple concepts can be used to create a more general algorithm that has been implemented in matlab to compute the gravity of irregular bodies. Shapes are described in terms of Standard Tessellation Language files, the standard format for 3D printing. This approach to teaching allows students to model physical bodies, and the 3D representation of complex problems can help students acquire a more complete understanding of physics.

The Newtonian gravity of irregular shapes using STL files and 3D printing by Eduardo Rossi. DOI: 10.1119/10.0005404
In a charming example of how developments in one field can be exploited in another, the author shows how algorithms used in 3-D printing can allow students to calculate the gravitational interaction between irregular bodies, an important topic in solar system astronomy that is rarely tackled in undergraduate mechanics courses. As a bonus, you can print models of the objects for which you calculate orbits, such as those shown on the cover of this issue.

The Hohmann transfer as an application for teaching introductory physics by A. M. Capece and J. L. Gazley. DOI: 10.1119/10.0005659
The authors describe a summer “bridge” course designed to help at-risk STEM students transition successfully from high school to college. In this ambitious two-week module, students learned the basic physics concepts and programming skills (using VPython and Excel) needed to plan an interplanetary trip from Earth to Venus. Based on retention in STEM programs, grades in the module and in subsequent STEM courses, and survey/interview data, the course achieved its goals admirably.

An algebra and trigonometry-based proof of Kepler's first law by Akarsh Simha. DOI: 10.1119/10.0005669
The author proves Kepler's first law, that planetary orbits are elliptical, using basic trigonometry and geometry. By invoking the reflection property of the ellipse, calculus is avoided entirely, making this approach ideal for use in introductory physics and astronomy courses.

Energy conservation strategies for electric vehicles on hills by François Schiettekatte. DOI: 10.1119/10.0005854
Many owners of electric cars strive to drive as efficiently as possible, and may wonder about optimum algorithms for hill driving. This paper works out an algorithm in a way that provides an interesting example for an intermediate-level mechanics or computational physics course.

The toppling of a uniform rectangular block by Peter F. Hinrichsen. DOI: 10.1119/10.0005889
When a rigid object tips over, static friction creates a complex interaction between rotational and translational motion. Surprisingly, regardless of how large is the coefficient of static friction, the object will slip at some point during its fall. This paper compares theory to experimental results on toppling granite blocks, using both video analysis and accelerometer data. The analysis could form the basis of a student project or a mechanics lab. The link above will also take the reader to the article's video abstract.

Momentum conservation in the Biot–Savart law by Onuttom Narayan. DOI: 10.1119/10.0005207
The Biot-Savart law shows that the forces between two interacting current elements do not obey Newton's third law. But momentum is conserved when complete circuits (rather than isolated current elements) are considered. In this article, the author presents us with two interacting electric dipoles, each fed by a slowly increasing (non-sinusoidal) current. Each is a complete circuit, but the combined electric and magnetic forces on the dipoles are not equal and opposite! What's wrong? As the author shows, one must include the momentum carried by the electromagnetic fields to restore momentum conservation. Parts of the derivation may be suitable for student exercises.

Kelvin's clouds by Oliver Passon. DOI: 10.1119/10.0005620
In 1900, in a famous lecture, Lord Kelvin identified two important “clouds” that physics had to face at the turn of the century. The first one dealt with the motion of ether, the second one with the energy equipartition theorem. This lecture is often misrepresented in textbooks or popular science books either as a self-satisfactory assessment of the end of all great physics discoveries or as a prescient anticipation of special relativity and quantum mechanics. This article is here to correct the record. It could be used in history of science classes or in a discussion of the foundations of relativity and/or quantum mechanics.

“Everyone is new to this”: Student reflections on different aspects of online learning by Danny Doucette, Sonja Cwik and Chandralekha Singh. DOI: 10.1119/10.0005795
How effective was online instruction during the COVID pandemic? Following the Fall 2020 semester, the authors conducted a survey of over 1000 students at their institution to identify what students perceived to be the most salient advantages – and disadvantages – of remote instruction. The survey results suggest concrete strategies for improving online instruction and have relevance to in-person teaching as well.

A gentle introduction to the non-equilibrium physics of trajectories: Theory, algorithms, and biomolecular applications by Daniel M. Zuckerman and John D. Russo. DOI: 10.1119/10.0005603
Non-equilibrium phenomena are ubiquitous in everyday life, but the physics underlying them is rarely discussed in undergraduate courses treating statistical mechanics. The authors show how to fill this gap using trajectories, which are the dynamical paths a system takes though phase space governed by the forces acting on the system. The trajectory approach allows one to examine the intermediate steps taken by a system during a transformational process (e.g., protein folding), while also calculating observables such as reaction rates. The authors conclude by presenting a modern, highly efficient algorithm, called the weighted ensemble approach, for studying statistically rare events that would otherwise demand excessive computational resources.