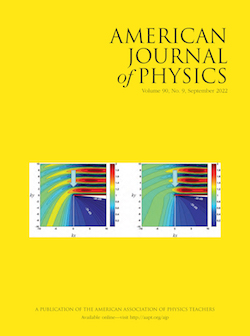 Shielding involves much more than just putting a conductive screen in between an emitting source and a susceptible device. Starting from Maxwell's equations, the concept of electromagnetic shielding is formally explained. The physical working mechanisms behind the two basic forms of shielding, electric field and magnetic field shielding, are given, and the link between them at higher frequencies is clarified. Several aspects, like the effect of gridding or weaving a shield, the effect of the finite size of a shield, and the penetration through the metal of a shield, are discussed based on very simple canonical shielding topologies that can be solved analytically. Although the classical paradigm to explain shielding based on the notions of skin depth and eddy current is not followed, conceptual links with this classical paradigm are explained.

Calculation and measurement of center of mass: An all-in-one activity using Tangram puzzles by Jose M. Campillo-Robles, Ibon Alonso, Ane Gondra and Nerea Gondra. DOI: 10.1119/5.0061884
Experimentally determining a rigid body's center of mass is straightforward and is often done in middle or high school. An accurate calculation of the center of mass is more of a challenge for undergraduate students, especially if the body in question does not possess a high degree of symmetry. This article presents a flexible activity where students create their own geometric figure, analytically calculate its center of mass with the aid of CAD software, and then check their results experimentally.  Student and instructor resources are provided to readers as supplemental material.  Instructors of applied physics or engineering physics may be particularly interested in adapting and implementing this activity in their courses. A video abstract accompanies the online version of this paper.

The golfer's curse revisited with motion constants by Olivier Pujol and José-Philippe Pérez. DOI: 10.1119/5.0060788
Calling all golfers. How often have you experienced that moment of horror as your perfectly-directed putt rolls around on the lip of the hole, seemingly undecided as to whether it will fall in or spite you by popping back out onto the green? This paper, appropriate for an advanced dynamics class, investigates the physics of this situation both theoretically and experimentally. Popping-out behavior is, in principle, possible for balls with high enough rotational velocities, on the order of 20 radians per second. While this is higher than would normally be the case in a game (which is probably why such emergence is rare in practice), it is not unreasonable: try making it happen. Experimentally, the authors report measurements of the moment of inertia and coefficient of dynamic friction of a golf ball.

Conic transfer arcs for Kepler's problem by Robert W. Easton, Rodney L. Anderson and Martin W. Lo. DOI: 10.1119/5.0080491
Orbits for spacecrafts can be optimized for fuel costs, travel time, or a variety of other quantities. Inspired by the Lambert problem, this paper shows how to find all possible orbits between two points in terms of a single parameter, thus simplifying the problem of searching for an optimized orbit.

The basic concepts determining electromagnetic shielding by Guy A. E. Vandenbosch. DOI: 10.1119/5.0087295
Undergraduate treatments of the interaction of electromagnetic waves with surfaces frequently involve only a brief discussion of reflection, transmission, absorption, and skin depth. Unfortunately, this treatment leaves students underprepared to understand electromagnetic shielding in practical applications. While the intricacies of shielding are discussed in the research literature, this paper bridges the gap, providing an understanding of how shields work in various geometries and guidelines for their effectiveness.

Electrostatic shape energy differences of one-dimensional line charges by Matt Majic. DOI: 10.1119/5.0079100
Subtracting two divergent quantities to obtain physically relevant information is a technique used in many branches of physics. This paper explores this process both analytically and numerically in an electrostatics context. Undergraduate students will already know how to calculate the electrostatic potential energy of a continuous charge distribution and may already be aware that the potential energy of a one-dimensional line charge is formally infinite. Nevertheless, students can learn to think of the one-dimensional case as a limit of various extended objects. By subtracting the self-energy of two differently shaped objects, a finite energy difference is obtained, even in the one-dimensional limit. Students of electromagnetism will undoubtedly be interested in the content of this article, as will anyone who wants to learn more about the fine art of taming infinities.

A new presentation of electromagnetic relations in SI units by Mitchell Golden. DOI: 10.1119/5.0085513
Many instructors are familiar with the struggle of trying to explain the meaning of the permittivity of free space ε0 and the magnetic permeability of free space μ0 when teaching electromagnetism. While it is common to blame SI units for this circumstance, this paper shows how electromagnetism can be reformulated within SI to do away with these historical constants while retaining the general convenience of SI by introducing a new, common-sense coupling constant.

Black-hole analog in vehicular traffic by Luanna K. de Souza and George E. A. Matsas. DOI: 10.1119/5.0091957
This article offers an amazing connection between a situation familiar to students, namely the danger under extreme weather conditions of a traffic pileup, and the appearance of a black hole communication horizon. The corresponding vehicular spacetime analogue can serve as a simple introduction to black hole physics.

An approach to graded physics colloquium assignments by Eric W. Burkholder. DOI: 10.1119/5.0097099
Most graduate programs require students to attend departmental colloquia on a credit or non-credit basis as part of their curriculum. However, little literature exists on faculty expectations for why students should attend and what they are expected to get out of colloquia, student perceptions of their value, or assessments of how well any expectations are met. This paper describes a model for a graded colloquium course that involves a faculty survey of expectations and student feedback on the effectiveness of presentations. Suggestions for future revisions to the model are suggested, as are possible avenues for future study.

Apparatus and method to recover the Mueller matrix in bright-field microscopy by Sofia Obando-Vasquez, Ana Doblas and Carlos Trujillo. DOI: 10.1119/5.0081673
A polarization-sensitive brightfield microscopy setup to measure the Mueller matrix of transparent samples is presented. Acquisition and analysis of thirty-six intensity-based images using this setup is demonstrated to produce a sample’s Mueller matrix, from which several of the sample’s optical properties can be determined, including diattenuation, polarizance, retardance, depolarization, and angle of polarization. Samples investigated include a linear polarizer and two biological materials. The work described here offers an accessible optics-related project on polarization and Mueller matrix analysis for the undergraduate instructional laboratory.

Are Electromagnetic Fields Making Me Ill? How Electricity and Magnetism Affect our Health by Robert G. Olsen. DOI: 10.1119/5.0107970