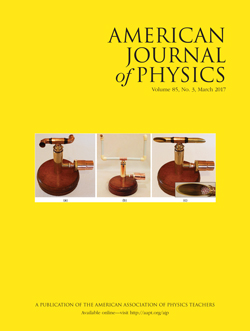 AAPT announces that Richard Price, Massachusetts Institute of Technology, will assume the position of Editor for the  American Journal of Physics in September 2017, following the term of David P. Jackson.
Read more.

The reverse sprinkler problem popularized in Richard Feynman’s memoirs has long been a source of interest and controversy. Numerous theoretical and experimental studies have illuminated many important facets of the problem, yet disparities persist between theory and experiment. This work considers, for the first time, the spatial distribution of inertial and pressure forces on the sprinkler arms. Differences in the regions over which internal and external forces act constitute a forcecouple with different moment arms consistent with reverse rotation. Two novel sprinkler forms are presented, in principle capable of forward-only and reverse-only rotation, to elucidate specific features of this concept. It is also seen that the resulting flow-field asymmetry developed downstream from the sprinkler-arm bends supports the role of vortices in reverse sprinkler rotation by suggesting a mechanism for generating vortices in a consistent direction. The experimental challenges of isolating specific forces in light of both non-conservative forces and the influence of device design are also discussed. VC 2017 American Association of Physics Teachers.

Finding the location of the instantaneous center of rotation using a particle image velocimetry algorithm by Tom Claessens. DOI: 10.1119/1.4973427

Radiation reaction from electromagnetic fields in the neighborhood of a point charge by Ashok K. Singal. DOI: 10.1119/1.4972246

LETTER TO THE EDITOR

A low-cost polarimeter for an undergraduate laboratory to study the polarization pattern of skylight by Chula P. Abayaratne, and Vibodha Bandara. DOI: 10.1119/1.4971159