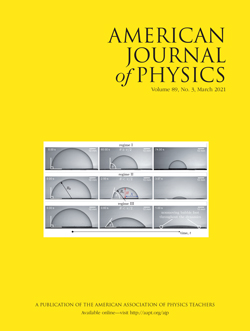 We discuss a simple experiment investigating the shrinkage of surface soap bubbles sitting on a thin solid plate with a circular orifice located under the apex of the bubble. We identify three different shrinking regimes, the occurrence of which depends on a combination of key parameters that include the ratio between initial bubble and orifice sizes and physicochemical properties of the fluid system. For low-viscosity liquids and/or large ratios, a bubble remains quasi-hemispherical as shrinking proceeds. In contrast, for liquids with sufficiently large viscosities and/or small geometric ratios, a bubble seeks the shape of a spherical cap while the air inside it escapes through the orifice. In this case, shrinking proceeds with a bubble foot that either recedes over time or does not move for the largest viscosities and/or smallest ratios. We use basic physical arguments to rationalize the three identified regimes and to explain the shrinking dynamics. Specifically, this model which captures observations and measurements is based on Bernoulli's principle for the air flow, volume conservation, and a friction law that accounts for viscous dissipation at the moving bubble foot.

The sun diver: Combining solar sails with the Oberth effect by Coryn A. L. Bailer-Jones. DOI: 10.1119/10.0002178
By deploying a large gossamer sail, a spacecraft can exploit the Sun's radiation pressure to reduce the amount of fuel required to travel beyond the Solar System. But when and where should the sail be unfurled and the rocket fuel burned? The answer may surprise you and intrigue your undergraduate students.

Different scenarios of shrinking surface soap bubbles Video Abstract Icon by Mattéo Clerget, Alexandre Delvert, Laurent Courbin and Pascal Panizza. DOI: 10.1119/10.0002348
Understanding the shrinking of a spherical cap bubble on a wetted surface involves several areas of physics applied to analysis, computation, and experiment. This article points out how related problems can be used for instruction or projects by advanced undergrads or grad students. The link above will also take the reader to the article's video abstract.

High-speed visualization of soap films bursting dynamics by Arseny A. Volodko and Alexander E. Dubinov. DOI: 10.1119/10.0002494
The propagation of bursts in soap films can be studied in the teaching laboratory or demonstrated in classes. High speed digital video shows the evolution of a rupture in a soap bubble, which is explained at a level appropriate for introductory college or high school physics courses.

Mechanical approach to surface tension and capillary phenomena by Marc Durand. DOI: 10.1119/10.0002411
Although surface tension and capillary action are typically introduced via thermodynamics, a mechanical approach can also be used. This paper corrects errors that are often made in such an approach, but also shows that it can be instructive for undergraduate students beyond introductory courses.

Understanding and enhancing the impact-induced tension of a falling chain by J. Pantaleone. DOI: 10.1119/10.0002361
The mechanism of greater-than-g acceleration of a falling chain is elucidated through theory and experiments. Further investigations appropriate for undergraduate instructional labs and research are proposed.

Resolving tensions surrounding massive pulleys by D. J. Durian, J. Kroll and E. J. Mele. DOI: 10.1119/10.0002405
Tension in a string, which is redirected by a pulley, is usually idealized by treating the magnitude of the tension as being constant throughout. In this paper, which is appropriate for an intermediate or advanced mechanics class, the authors examine the tension profile in situations where the pulley or string elastically deforms.

Eddy currents in multilayer coils by Igor N. Gorbatyy and Iana P. Zhura. DOI: 10.1119/10.0002444
An example of eddy current behavior in multilayer coils is described, which dramatically increases the active resistance of the coil with increasing frequency. This behavior is due to the “proximity effect”-namely, the interaction of currents in closely related conductors. Appropriate for intermediate or advanced circuits labs.

How much electric surcharge fits on … a “white dwarf” star? by Parker Hund and Michael K.-H. Kiessling. DOI: 10.1119/10.0002436
A failed white dwarf star turns out to be an elegant stage for working out a number of pedagogically interesting problems, all aiming towards the goal of determining the limits of surplus charge it can accommodate. Instructors in statistical mechanics, quantum mechanics, solid state physics, and, of course, stellar astronomy, can all find interesting examples to incorporate into their courses.

Transport through quantum dots: An introduction via master equation simulations by Robert A. Bush, Erick D. Ochoa and Justin K. Perron. DOI: 10.1119/10.0002404
A master equation approach is presented for simulating transfer through single-electron transistors and quantum dots. By using simulations, students can build a strong understanding of transport through quantum dots without the financial overhead associated with experimental studies. Suitable for an undergraduate independent study or computational physics project.

Active learning in a graduate quantum field theory course by G. Peter Lepage. DOI: 10.1119/10.0002349
Despite the demonstrated success of active engagement techniques on student learning, it remains less common to see such techniques employed in advanced courses than at the introductory level. This article provides a first-hand account of a redesigned course on quantum field theory with an emphasis on active learning. The article will be of interest to educators who desire a fresh approach to learning in their advanced courses.

Physically significant phase shifts in matter-wave interferometry by Chris Overstreet, Peter Asenbaum and Mark A. Kasevich. DOI: 10.1119/10.0002638
Physical intuition about phase shifts in a matter-wave interferometer is developed by analogy with a classical accelerometer. Using the midpoint theorem, the authors show that the analogy holds when the spatial-dependence of the potential energy is degree 2 or lower on the scale of the wavepacket separation. For higher order potentials, the phase contains a nonlocal term with no classical counterpart. Useful to novices and experts in the fields of atom interferometry and quantum sensing.