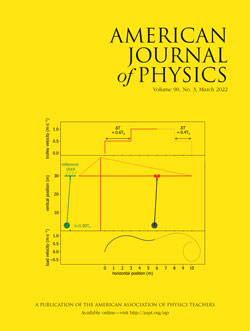 The crane operator's trick and other shenanigans with a pendulum featured

The dynamics of a swinging payload suspended from a stationary crane, an unwanted phenomenon on a construction site, can be described as a simple pendulum. However, an experienced crane operator can deliver a swinging payload and have it stop dead on target in a finite amount of time by carefully modulating the speed of the trolley. Generally, a series of precisely timed stop and go movements of the trolley are implemented to damp out the kinetic energy of the simple harmonic oscillator. Here, this mysterious crane operator's trick will be revealed and ultimately generalized to capture the case where the load is initially swinging. Finally, this modus operandi is applied to a torsion balance used to measure G, the universal gravitational constant responsible for the swinging of the crane's payload in the first place.

The crane operator's trick and other shenanigans with a pendulum by Stephan Schlamminger, Leon Chao, Vincent Lee, David B. Newell and Clive C. Speake. DOI: 10.1119/10.0006965
Next time you want to control the oscillations of a pendulum, you might want to call a crane operator for help: they are experts in juggling swinging loads that are being transferred from one point to another. Using the Laplace transform formalism, this paper exposes their trick to damp the load's oscillations and shows how it can be applied to improve metrological measurements of the gravitational constant. The paper can be useful in undergraduate mechanics class or as an example of the use of Laplace transform for system control, but you'll also want to read it just to learn about this example of physics in action. The link above will also take the reader to the article's video abstract, which includes simulations that provide an excellent introduction to the work.

Gravitational orbits and the Lambert problem by Ian R. Gatland. DOI: 10.1119/5.0060998
The Lambert problem requires finding an orbit that passes through two points in a specified time interval. It was posed and solved by Lambert in the 18th century (long before it was needed for spaceflight!), but the solution can still be challenging for undergraduates. This paper presents an insightful iterative method that could be presented in an introductory mechanics course.

A new microscopic look into pressure fields and local buoyancy by S. Meneses João, J. P. Santos Pires and J. M. Viana Parente Lopes. DOI: 10.1119/5.0060479
Local pressure fields are integral to understanding buoyancy, atmospheric phenomena, and other systems, but standard statistical mechanics approaches only derive the global thermodynamic pressure from the microscopic description of the system. In this article, the authors present a way to obtain the local pressure field as a derivative of the system's partition function using a soft-wall barometer potential. The approach has both a formal mathematical description as well as an intuitive physical explanation. Teachers of advanced undergraduate or graduate statistical mechanics may find this inspiring material for projects or problem sets.

Multivalued specific heat by Matheus G. Pacheco, Reinaldo de Melo e Souza and Daniela Szilard. DOI: 10.1119/10.0006899
Specific heats are usually assumed to be constant in thermodynamic processes for sake of simplicity. But because they are actually temperature dependent, they must also be path dependent, and for processes that are tangent to an isotherm this creates difficulty because DQ/DT is not defined; it is then necessary to invoke multivalued specific heat functions. This paper explores the conditions any path must satisfy in order to possess a single-valued specific heat. As a bonus, the authors use thermodynamic concepts to prove a geometric theorem regarding the areas of triangles and trapezoids bounded by hyperbolas. Appropriate for undergraduate thermodynamics classes.

General formalism for calculating the thermal efficiency of thermodynamic cycles defined in a p–V diagram by Viktor Könye and József Cserti. DOI: 10.1119/5.0064010
Calculating the efficiency of a thermal engine is often tricky for students. Plus, it is not usually fun. This paper shows that this is not inevitable. Starting from the parametrization of the engine's cycle in the pressure-volume diagram, and knowing the fluid's equation of state, the authors show that one can easily (numerically) calculate the amount of heat given to or released by the system, and hence determine the corresponding efficiency. They showcase their method on cute-looking cycles, although it can also be applied to practical engines. Appropriate for undergraduate thermodynamics classes.

Progressive quantum collapse by William J. Mullin, Asaad R. Sakhel and Robert J. Ragan. DOI: 10.1119/10.0009255
Instantaneous collapse of a wave function to one of its eigenstates upon measurement is one of the distinguishing features of the Copenhagen interpretation of quantum mechanics. Most introductory quantum textbooks teach calculation techniques that rely upon this assumption of instantaneous collapse, with unitary time evolution between measurements. This paper uses these standard techniques for individual particles, but applies them to a coherent many-body state that is measured one particle at a time. When calculated in this way, collapse of a many-body state is a process rather than being instantaneous. But when the many-body state is coherent, that collapse occurs very quickly. This relatively simple exercise may help Quantum II students think more deeply about the concepts of collapse, and also about coherence in a many-body state.

Unexplored aspects of a variational principle in electrostatics by Kolahal Bhattacharya and Debapriyo Syam. DOI: 10.1119/5.0060116
Students who have been introduced to variational methods in mechanics or optics could gain unexpected new insights through the employment of this approach in an at-first-sight-unrelated domain. The authors show that the determination of electrostatic field lines occurs in a manner analogous to Fermat's principle in optics, and some properties of the vector field can be deduced directly from transformation properties of the corresponding action integral.

Measuring the speed of light using optical feedback from a picosecond diode laser by Abdulaziz M. Aljalal. DOI: 10.1119/10.0007144
An accurate speed-of-light measurement is performed in which the spatial distance between successive optical pulses from a picosecond diode laser is measured. The pulses are generated at known time spacing of 12.5 ns. The required setup occupies a space of only 2 m ×  0.5 m, and it does not implement either a fast detector or an oscilloscope. This experiment is suitable for an undergraduate physics instructional laboratory course or as an independent student project.

The “spring” Stirling engine by Alejandro Romanelli. DOI: 10.1119/10.0007153
Simplified analytic representations and physical models can be helpful in understanding the physics of complex devices and processes. This paper describes a “toy” Stirling cycle where a displacer connected to a spring oscillates inside an air-filled test tube where one end of the tube is closed and heated externally while the other is connected to a liquid-filled U-tube. The displacer sweeps cold and heated air back-and-forth within the tube, with the work produced being used to move the liquid. Analysis of the system dynamics predict a period on the order of 0.1 second. Readers are invited to work toward building an engine based on this model.