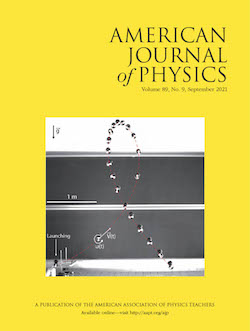 The physics of Magnus gliders

Forces and conservation laws for motion on our spheroidal Earth by Icon Boyd F. Edwards and John M. Edwards. DOI: 10.1119/10.0004801
While our Earth’s shape differs only very slightly from spherical, this deviation has profound effects on the motion of objects on its surface. This paper derives the motion and presents software that can be used to visualize it. Appropriate for intermediate-level mechanics courses, and also important to meteorology. The link above will also take the reader to the article’s video abstract.

The physics of Magnus gliders by Nicolas Plihon, Gauthier Legrand, Francis Pagaud, Arsène Chemin, Jérémy Ferrand and Nicolas Taberlet. DOI: 10.1119/10.0004981
Ever wonder if there’s a mechanical analog to a charged particle in crossed E and B fields? These authors construct one in the form of a “Magnus glider”—little more than two styrofoam cups glued together and launched with high backspin—and use high-speed photography to image its trajectories under various initial conditions. A simple analysis is followed by a more sophisticated one using drag coefficients measured in a classic wind tunnel experiment.

The Newcomb–Benford law: Scale invariance and a simple Markov process based on it by Andrea Burgos and Andrés Santos. DOI: 10.1119/10.0004957
Take a list of numbers, say the length of each of U.S. roads, or the population of villages, towns, or cities in Morocco, or the width of pulsars, or even the file size in your computer. There is above 60% chance that any given number taken within those datasets begins with 1, 2, or 3. This is a consequence of the Newcomb-Benford law, also known as the first-digit law, which states that, counter-intuitively, all digits do not have the same probability of featuring in a number. Burgos and Santos derive the Newcomb-Benford law in a manner that is accessible to undergraduates (spoiler: they use the fact that the distribution of first digits should be scale-invariant in all datasets in which the quantities are measured in units) and mention a stunning number of cases where this law applies. They also model a simple Markov process that irreversibly evolves towards the Newcomb-Benford law. An analogy with thermodynamics and entropy is developed. This article is appropriate for advanced undergraduate or graduate classes in applied probability or statistical mechanics. You can also read it just to have the opportunity to shine in society.

Interference patterns produced by an evaporating droplet on a horizontal surface by Gia Long Ngo, Quang Truong Pham, Ngoc Diep Lai and Danh Bich Do. DOI: 10.1119/10.0004958
The authors investigate, theoretically and experimentally, the circular interference pattern generated by a drop of water or photoresist resting on a glass plate. As the drop evaporates (water), or as its index of refraction changes (photoresist), fringes collapse to the pattern center or emerge from it, depending on the location of the observation plane. The dynamic interference pattern provides a very sensitive tool for measuring nanometer-scale changes in droplet height or for studying the process of polymerization in the photoresist. No special apparatus is needed, and the setup is suitable for an upper-level undergraduate lab exercise.

A physics-based study of the stagnation enthalpy rise of moving normal shocks by Eric Van Horn and David Scarborough. DOI: /10.1119/10.0004983
The transfer of stagnation enthalpy across onedimensional translating shock waves is analyzed using the classical steady Rankine-Hugoniot relations. The stagnation enthalpy, defined as the combination of the internal energy, kinetic energy, and pressure “flow work,” is shown to increase due to the compression of the fluid as the shock propagates through the fluid. Appropriate for fluid dynamics courses that treat compressible fluids.

Understanding energy propagation during reflection of an evanescent electromagnetic wave by Yashvir Kalkal and Vinit Kumar. DOI: 10.1119/10.0004834
Evanescent waves arise in electromagnetism when a plane wave is incident on an interface and undergoes total internal reflection. In most textbook analyses, the evanescent wave does not carry any energy, but in some circumstances, they can transform to a plane wave and propagate energy. This paper, which is appropriate for students in advanced E&M classes who are familiar with complex analysis, explores the conditions wherein this phenomenon arises.

Making squeezed-coherent states concrete by determining their wavefunction by E. Munguía-González, S. Rego and J. K. Freericks. DOI: 10.1119/10.0004872
Squeezed-coherent states are built from the simple harmonic oscillator ground state. They have a Gaussian waveform in which width varies in time, so that their standard deviation, for instance in the position-momentum phase space, is a time-dependent ellipse. This is actually why they are of practical importance: They allow for measurements with uncertainty smaller than that of a usual coherent state. This property is used in diverse applications: to improve the performance of stimulated emission microscopy for biological systems, to detect the motion of ions in ion traps, and to track gravitational waves in the Laser Interferometer Gravitation-wave Observatory (LIGO). This paper proposes three different derivations of the squeezed-coherent states wavefunctions, to help students grasp the reality of such states. Appropriate for advanced undergraduate or graduate students.