From the Executive Officer 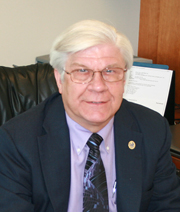 It is ironic at this time of significant economic uncertainty and collapse of the global economy that science, especially physical science, is poised to receive infusions of funding for research and education that have not been experienced since the Sputnik era. Bi-partisan support for science at the congressional level has been apparent in the passage of the America COMPETES Act in August 2007 and, although not bi-partisan, in the passage of the American Recovery and Reinvestment Act in February 2009.

At the 148th annual meeting of the National Academy of Science on April 27 (see www.nationalacademies.org/  for the text, audio and video of the speech), President Obama set a goal of devoting more than three percent of the Gross Domestic Product to research and development that will “create new incentives for private innovation, promote breakthroughs in energy and medicine, and improve education in math and science.” The President’s proposed budget will double the budget of the National Science Foundation, the National Institutes of Standards and Technology, and the Department of Energy Office of Science. On funding for education, Obama said “states making a strong commitments and progress in math and science education will be eligible to compete later this fall for additional funds under the Secretary of Education’s $5 billion Race to the Top program.”

Given this investment in science and technology, there will and should be expectations for significant return in terms of sources of renewable energy, reduced pollution, improvements in health care, and improvements in science and mathematics education. It is in science education, specifically physics education, where the members of AAPT have the most to contribute to the future science and mathematics enterprise of the United States. Due to the discipline-specific research being done by the Physics Education Research community, we know what works in terms of engaging students in their learning which then results in better understanding and retention of the physics content. As is often the case, knowing what works and getting the broader community to implement what works is the challenge.

AAPT has a number of programs and other opportunities where physics educators (anyone who teaches physics K-20) can learn about strategies and techniques to engage their students, improve the way in which their department prepares teachers, increase the number of students who take pre-college physics, and increase the number of students who choose a physics major in college. Some of these programs and opportunities are described at other places in this eNNOUNCER and on the AAPT web site, but I would like to highlight a few here:

•    The annual winter and summer meetings that include workshops by leaders in the physics education community. The 2009 Summer Meeting at the University of Michigan promises to be one of the best summer meetings ever. A Topical Conference on the Advanced Laboratory will be held before the meeting and the annual Physics Education Research Conference will follow immediately after the meeting.
•    The New Physics and Astronomy Faculty Workshops that will be held in June and November 2009. Approximately 160 new faculty in their first three years of service will attend these professional development workshops to learn about active engagement techniques that can be used to immediately enhance their teaching effectiveness. This is a joint program with APS and AAS led by AAPT and funded by NSF.
•    The NSF-funded ComPADRE Pathway project that provides peer-reviewed online digital resources in physical science, physics and astronomy for physics educators and students. This is a joint program with APS and AIP/SPS led by AAPT.
•    The Physics Teacher Education Coalition (PhysTEC) project whose goal is to increase the number and quality of pre-college physics teachers. This is a joint project led by APS with AAPT and AIP as active participants.  Funding is provided by NSF and the APS 21st Century Campaign. A National Task Force on Teacher Preparation is currently investigating the best practices in physics teacher preparation as an ancillary project to PhysTEC.
•    AAPT/PTRA is a professional development program for pre-college teachers that has been funded almost continuously by NSF since 1985. Although NSF funding is ending, the AAPT/PTRA program has been active in a number of states through state-funded MSP programs and a professional development institute will be held in Ann Arbor the week prior to the summer meeting.
•    NSF-funded SPIN-UP regional workshops will be held in 2009 at Marquette, Cal Poly San Luis Obispo, Rutgers, and North Carolina State University. The purpose of these regional workshops is to help physics departments improve their undergraduate programs with the goal of increasing their number of undergraduate majors. This is a joint program with APS and AIP led by AAPT.

This is just a sample of the many projects and opportunities for professional development in which AAPT is leading or actively participating. While many of these have external funding, this funding does not cover the total costs of the programs and AAPT member dues provide significant support for these and the many programs that do not have external support (i.e. the International Physics Olympiad, the Physics Bowl, New Teacher Workshops, the work of Area Committees, AAPT Career Center, etc.). In addition, NSF has an expectation that programs such as ComPADRE will be sustained by the associations when funding ends, as it eventually will.

In these times of economic stress, your membership in AAPT is more important than ever to support and maintain the programs of the association. We have taken steps to make your membership more valuable by providing access to both AJP and TPT electronically, independent of your journal subscription. This includes access to the back issues of AJP to 1931 and to 1963 for TPT.  You can now receive Table of Contents updates automatically and the eNNOUNCER provides monthly news that is more timely and complete than the paper Announcer. Every Area Committee has a listserv that is open to AAPT members and several new WEB 2.0 resources are being developed for those who are interested. Members receive significant discounts for materials purchased through the AAPT Physics Store and for meeting registrations.

Pre-college member dues are about $0.22 per day, college and university member dues are between $0.35 and $0.45 per day depending on the subscription. All subscriptions include electronic access to both journals.  Student member dues for high school, college/university, and graduate students are less the $0.07 per day and student members can continue in their dues category for three years beyond graduation. I have been proud to be a member of AAPT for almost 40 years and I firmly believe that all physics educators should belong to the professional association whose mission is to “Strengthen physics education and support physics educators.”

If you are currently an AAPT member, I encourage you to continue your membership and make this great membership bargain known to your fellow physics educators. Refer them to the AAPT homepage where they can join online by clicking on the join button on the top menu bar. The more AAPT members we have, the more good work the association can do to support our mission and meet the challenge of improving physics education.