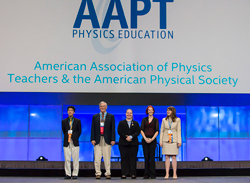 College Park, MD, May 30, 2014—AAPT/APS Special Awards in Physics and Astronomy at the 2014 International Science and Engineering Fair (ISEF) were announced during the awards ceremony at the conclusion of the fair. The 2014 competition, held in Los Angeles, California, May 11-16, is the only international science project competition for students in grades 9 through 12. Students qualify to compete by participating in school, local, regional, and/or state science fairs.

The Intel International Science and Engineering Fair (Intel ISEF),https://student.societyforscience.org/special-awards-organizations is the world’s largest international pre-college science competition, providing an annual forum for more than 1,700 high school students from over 70 countries, regions, and territories to showcase their independent research and compete for about $5 million in awards.

Top award winners receive a one-year AAPT and APS student membership, a certificate from both AAPT and APS, as well as one-year electronic subscriptions to AAPT's journals, "The Physics Teacher," "The American Journal of Physics," and other APS journals. Each sponsoring teacher of a student who receives an AAPT and APS award also will receive a certificate.