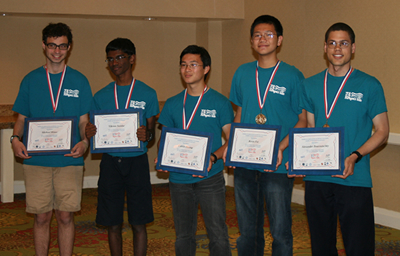 For immediate release.
June 6, 2014, College Park, MD — Five students have been selected to represent the U.S. Physics Team as the 2014 Traveling Team at the 45th International Physics Olympiad, a competition among high-school physics students, to be held July 13 – 21, 2014 in Astana, Kazakhstan.  They will be accompanied by coaches Paul Stanley and David Fallest.

"Without a doubt this group of students is the strongest group I have ever worked with," said Academic Director, Paul Stanley. He compared the group to Bose-Einstein condensation for the way they coalesce into a single entity, transforming from 19 separate students into a single entity, the United States Physics Team.  "I would have been happy to travel with them all but the rules of the International Physics Olympiad required that we choose five."

The students attended a rigorous training camp at the University of Maryland and George Washington University, where, through classes, labs, and special lectures, they were coached on difficult physics concepts, and then took a series of exams. They also made a trip to nearby Washington, DC to visit their senators. The leaders of the 2014 U.S. Physics team are: Paul Stanley, Academic Director; Senior Coach, Andrew Lin; Coaches, JiaJia Dong, David Fallest; and Assistant Coach, Lucy Chen.

U.S. Physics Team Selection
AAPT is responsible for recruiting, selecting, and training the U.S. Physics Team each year to compete in the IPHO Competition. This selection process begins in early January when high schools register their students to participate in the Fnet=ma exam. Approximately 300 top scorers on this first test advanced to the Semifinal round of competition.

A second exam is used as the basis for selection of the members of the U.S. Physics Team.  In May these students traveled from schools all over the United States, to the University of Maryland-College Park for the U.S. Physics Team Training Camp. There, they engaged in nine days of intense studying, mystery lab, daily exams, and problem solving.

At the end of that training camp, five students and an alternate were selected as the "Traveling Team" to represent the United States Physics Team at the IPhO. In July, the Traveling Team and their coaches will attend a three day Mini Camp of intense laboratory work before moving on to the IPhO.

About AAPT
AAPT (www.aapt.org) is the premier national organization and authority on physics and physical science education —with members around the word.  Our mission is to advance the greater good through physics education. To this end, AAPT provides our members with numerous opportunities for professional development, communication, and student enrichment.