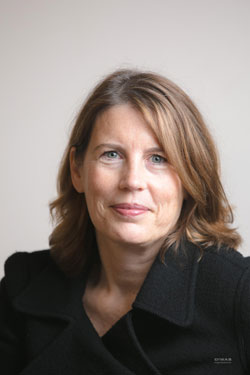 2022 Homer L. Dodge Citation for Distinguished Service to AAPT to be Awarded to Paula Heron

College Park, MD, March 2, 2022—AAPT has announced that Paula Heron will receive the association's Homer L. Dodge Citation for Distinguished Service to AAPT, during their 2022 Summer Meeting. Heron, a Professor of Physics at the University of Washington, Seattle, WA is honored for exemplary service contributions to the mission of the American Association of Physics Teachers to promote the pedagogical skills and physics knowledge of the teachers at all levels, and to increase understanding of physics learning and of ways to improve teaching effectiveness, and to disseminate this knowledge to a broader community of physics educators.

Regarding her selection to receive this citation, Heron said, “AAPT has played a vital role in my professional life so I am truly honored to receive this award, which has been given to so many physics educators who I admire and respect.  It has been a pleasure to support AAPT and its mission, which has never been more important.”

A member of AAPT since 1996, Heron has served on several committees including the Committee on Teacher Preparation, Committee on Research in Physics Education, and the Committee on Women in Physics as well as the Nominating and Programs committees. A senior member of the PER community who has contributed a great deal to the understanding of learning and teaching in physics, Heron is well known for her abundant service to the physics education community more broadly, and specifically to AAPT.

In 2014 she co-chaired the AAPT/APS Joint Task Force on Undergraduate Physics Programs, which was charged with addressing the question, “What skills and knowledge should the next generation of undergraduate physics degree holders possess to be well prepared for a diverse set of careers?” She brought a deep knowledge of AAPT and all of its many activities to the Task Force. The outcome of this work was the report Phys21: Preparing Physics Students for 21st Century Careers released in October 2016. Many talks about the task force’s findings have been given at AAPT and APS meetings, and the report is beginning to have a significant influence on physics programs across the country.

Heron has also made important contributions to the AAPT publications American Journal of Physics (AJP) and The Physics Teacher (TPT). As a member of the Editorial Board of TPT she helped guide the journal to better serve its community and brought valuable perspectives from her service in various leadership and advisory roles on related APS journals (including Phys. Rev. PER) and her long engagement with various AAPT activities in teacher preparation. As a member of the search committee for the new Editor of AJP she leveraged her extensive contacts in the physics education community to help recruit Beth Parks. Many people contribute to AAPT’s mission in physics education by writing and refereeing manuscripts for these two journals, but few have had as significant a leadership role in both of them.