AAPT Oersted Medal for 2020 to be Awarded to David Sokoloff 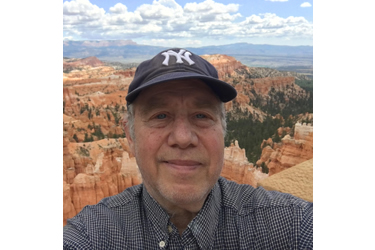 College Park, MD, October 30, 2019—David Sokoloff has been named as the 2020 recipient of the prestigious Hans Christian Oersted Medal, presented by the American Association of Physics Teachers (AAPT). The Medal will be awarded at a Ceremonial Session of the 2020 AAPT Winter Meeting, in Orlando, Florida.  The Oersted Medal recognizes his outstanding, widespread, and lasting impact on the teaching of physics through his contributions to the development of active learning strategies and materials to motivate students—especially those using computer-based tools—and his extensive dissemination activities.  In connection with the award, Sokoloff will deliver a talk, "If Opportunity Doesn’t Knock, Build a Door: My Path to Active Dissemination of Active Learning," at the Orlando meeting.

Regarding his selection as the recipient of this award, Sokoloff said, “This is a huge honor, and I am humbled by the list of Oersted Medalists that I now join. Like them, I have been motivated by the many university and secondary faculty who have perceived a need to improve the teaching and learning of physics, and the thousands of students who have benefited from these changes.”

Sokoloff is Professor of Physics, Emeritus at the University of Oregon. He earned his B.A. at Queens College of the City University of New York and his Ph.D. in AMO Physics at the Massachusetts Institute of Technology. For over three decades, he has studied students' conceptual understandings, and developed active learning approaches (with NSF and FIPSE support). These include Interactive Lecture Demonstrations (ILDs) and the four modules of RealTime Physics: Active Learning Laboratories (RTP), both published by Wiley and co-authored by Priscilla Laws and Ronald Thornton. His work has been published in the American Journal of Physics, the European Journal of Physics, Physical Review, Physics Education Research and The Physics Teacher. He has conducted numerous international and national workshops to disseminate these active learning approaches to secondary and university faculty. Since 2004, he has been a member of the UNESCO Active Learning in Optics and Photonics (ALOP) team, presenting workshops in more than 30 developing countries in Africa, Asia and Latin America. He is contributor to and editor of the ALOP Training Manual. The ALOP Team was awarded the 2011 SPIE Educator Award. He was awarded the American Physical Society (APS) 2010 Excellence in Physics Education Award (with Priscilla Laws and Ronald Thornton) and the American Association of Physics Teachers (AAPT) 2007 Robert A. Millikan Medal. He has been a Fulbright Specialist in Argentina (2011) and Japan (2018), is currently a member of IUPAP Commission 14 (International Commission on Physics Education), and has served in AAPT’s Presidential Chain (2009-2012).

About the Award
The Oersted Medal is named for Hans Christian Oersted (1777-1851), a Danish physicist who, in the course of creating a demonstration for teaching his class, discovered that electric currents cause a magnetic field. This was a crucial step in establishing the theory of electromagnetism so important in building modern technology and modern physics. The award was established by AAPT in 1936 and is given annually to a person who has had outstanding, widespread, and lasting impact on the teaching of physics. Some previous Oersted award winners are John Winston Belcher, Karl Mamola, Dean Zollman, George F. Smoot, Mildred S. Dresselhaus, Carl Wieman, Lillian McDermott, Hans Bethe, Carl E. Sagan, Edward Purcell, and Richard Feynman. The complete list of recipients can be found at http://www.aapt.org/Programs/awards/oersted.cfm