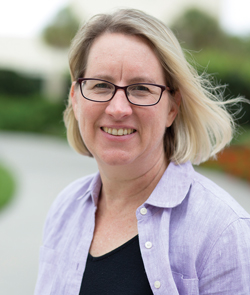 College Park, Maryland, United States, March 8, 2021—The American Association of Physics Teachers (AAPT) announced today that Anne J. Cox will receive the 2021 David Halliday and Robert Resnick Award for Excellence in Undergraduate Physics Teaching. This award is given in recognition of contributions to undergraduate physics teaching and awardees are chosen for their extraordinary accomplishments in communicating the excitement of physics to their students. John Wiley & Sons is the principal source of funding for this award, through its donation to the AAPT.

Regarding her selection for this award, Cox said, “I am humbled and honored to receive this award. An award from AAPT is particularly meaningful to me since AAPT has been the means by which I have learned so much about teaching and, more importantly, it has served as a professional home: a community that understands the joys and frustrations of the physics classroom.”

She began teaching at Eckerd College in 1995 and has been a dedicated teacher and researcher at the Physics Department, with her appointment as Professor in Physics in 2006. Her outstanding teaching, in physics and across disciplines, was recognized in 2004 when Anne received Eckerd’s Robert A. Staub Distinguished Teacher of the Year Award. She has also been a research mentor to over 25 Eckerd students in experimental work: from atomic cluster studies to developing experiments for advanced labs. Cox’s current research interests are curriculum development and pedagogical strategies to enhance student learning using technology. She is a contributing author of Physlet Physics: Interactive Illustrations, Explorations, and Problems for Introductory Physics and co-author of Physlet Quantum Physics, both now available on AAPT ComPADRE. In addition, she is the author or co-author of over a dozen papers on the pedagogical use of technology, with papers appearing in The Physics Teacher and Physics Education.

A very active member in the Florida Section of the AAPT, her service has included the leadership positions of President and Section Representative and twice she has hosted a Florida Section meeting. For this work, the FL-AAPT Section recognized Cox with their Distinguished Service Award.

She has also been an advocate for women in physics her whole career, starting as an undergraduate at Rhodes College where she was an advocate for herself, as the only physics major in her year as she recounts in the AAPT video, HERStories. She later participated the NSF ADVANCE sponsored, “Collaborative Research for Horizontal Mentoring Alliances,” which was a peer mentoring alliance of five female full professors in physics at liberal arts institutions. This peer mentoring experience led to Anne being a Co-PI on the NSF ADVANCE grant, “Mutual Mentoring to Reduce Isolation in Physics,” an AAPT project to develop mentoring networks of isolated women physics faculty.

Cox has been a fixture at AAPT meetings for over 20 years. She has served several times as a member and as chair of Committee on Women in Physics and the Committee on Educational Technology. In those capacities she has organized sessions and given numerous presentations and workshops. In 2008, she received a Distinguished Service Citation and is an AAPT Fellow.

In nominating her for this award, Cox’s colleague at Eckerd College noted, “It is well known that her door is open to all female faculty members on our campus and other campuses. I have seen her mentoring become an effective tool in retaining and recruiting some of our best new faculty in science and math. This has been mirrored in the growing populace of female physics majors among our undergraduate students. She empowers our faculty and students to have confidence in their creative ideas. She is continually trying new things, keeping those that work and discarding those that do not. When she finds an idea that does resonate she does her best, as good teachers do, to spread these ideas through publications, websites, grants, committees and conferences.