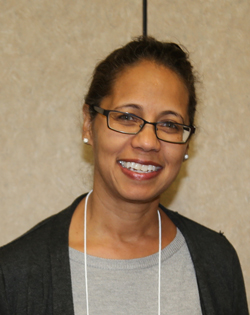 2022 Homer L. Dodge Citation for Distinguished Service to AAPT to be awarded to Arlisa L. Richardson

College Park, MD, October 13, 2021—AAPT has announced that Arlisa L. Richardson will receive the association's Homer L. Dodge Citation for Distinguished Service to AAPT, during their 2022 Winter Meeting. Richardson, a Professor of Physics at Chandler Gilbert Community College, Gilbert, AZ is honored for her service to AAPT, most recently as a Two-year College Representative on the Board of Directors.

Regarding her selection to receive this citation, Richardson said, “It’s been an honor to serve AAPT, an organization that has been an integral part of my professional development. I am extremely grateful and encouraged.”

Since joining AAPT in 2009, Richardson has been actively involved in the association serving on a variety of committees prior to her election to the Board of Directors.  She served on the Lotze Scholarship Committee helping to select the students who would benefit from Barbara Lotze's generous endowment on to benefit undergraduate students entering physics education programs.

As a member of the Committee on Physics in Two-year Colleges she played an important role in development of the content for AAPT Summer and Winter Meetings and workshops.

In 2017 she represented the US delegation to the 6th International Conference on Women in Physics (ICWIP) in Birmingham UK. Although the U.S. Delegation is not an AAPT exclusive group, AAPT is deeply involved in supporting its activities including pre- and post conference virtual meetings with the delegation, assisting with the editing of the proceedings, and many post conference activities such as panels at AAPT national meetings. She was actively engaged in the 2017 delegation, participating in the pre- and post conference virtual meetings with the delegation, preparing the U.S. poster presented at the conference, and writing the U.S. paper for the proceedings. She gave an invited presentation about her experience at ICWIP-2017 during the AAPT 2018 Winter Meeting.

Richardson has deep knowledge of how gender/racial bias creeps into certain situations and strategies to mitigate it. She has been involved in the American Institute of Physics (AIP) TEAMUP Task Force to address the low number of African American graduates in Physics and she worked collaboratively to research, visit colleges and universities, and compose the final report summarizing findings and highlighting best practices. She has been involved in two-year college campuses to help institutions think carefully about approaches to make the environment inclusive so that all students can thrive.