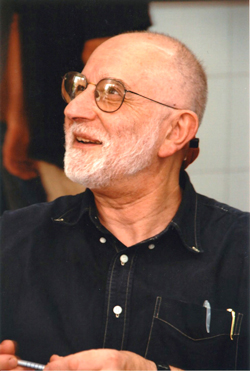 College Park, Maryland, United States, September 30, 2013—The American Association of Physics Teachers (AAPT) announced today that Professor Sir Michael Victory Berry, has been selected to receive the 2014 Richtmyer Memorial Lecture Award. Berry is recognized with the award for outstanding contributions to physics and effectively communicating those contributions to physics educators. The award will be presented at a Ceremonial Session of the AAPT Winter Meeting in Orlando, FL.

Sir Michael Berry is a world-renowned theoretical physicist, who is famous for his discovery of geometric phase effects ("Berry's phase") in quantum mechanics. His more than 450 scientific publications cover topics ranging from glaciers, to nonlinear dynamics, to optical diffraction, quantum chaos and caustics. He is also author of Principles of Cosmology and Gravitation. With a well-deserved reputation for polished, elegant and illuminating lectures, he has brought the excitement of contemporary theoretical physics to audiences around the world.

Regarding his selection for this award Berry said, “I am delighted to receive this unexpected honor from the AAPT, and humbled to be in the company of such distinguished previous recipients.”

His recognition with the Maxwell Medal and Prize of the Institute of Physics in 1978 was followed by numerous other science and mathematics awards, including the ignobel prize in physics in 2000, sharing the prize with Andre Geim for their work on "The Physics of Flying Frogs."

Berry was elected to the Royal Society of London in 1982, was elected a Foreign Member of the National Academy of Sciences of the USA in 1995, and Knighted by Queen Elizabeth in 1996.

Berry specializes in semiclassical physics (asymptotic physics, quantum chaos) applied to wave phenomena in quantum mechanics and other areas such as optics. He has given many prestigious lectures and has held visiting positions in Nigeria, Italy, Germany, The Netherlands, Switzerland, France, Australia, New Zealand, the United States, Israel, Mexico, and Belgium.

About the Award
The Richtmyer Memorial Lecture Award is given in memory of Floyd K. Richtmyer, distinguished physicist, teacher, and administrator. Professor Richtmyer was one of the founders of AAPT and served as its president. As a teacher, author, research worker, and dean, he was the guide for many young physicists who became leaders of American science and has had a wide influence on the development of physics in the United States. The award has been given since 1941 to a person who has made outstanding contributions to physics and effectively communicated those contributions to physics educators.