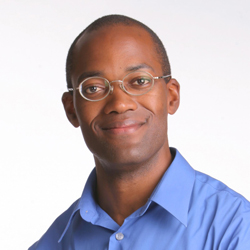 College Park, Maryland, United States, March 8, 2018—The American Association of Physics Teachers (AAPT) announced today that Clifford Victor Johnson, University of Southern California, Los Angeles, is the 2018 recipient of the Klopsteg Memorial Lecture Award. The lecture and award will be presented during the AAPT Summer Meeting in Washington, DC.

This award recognizes educators who have made notable and creative contributions to the teaching of physics. Johnson's exemplary commitment to both frontier research and to publicizing the excitement of physics on television and in movies and books continues to contribute to the public knowledge and understanding of physics.

Regarding his selection to receive the 2018 Klopsteg Award Johnson said, "It is a distinct honor to have my work recognized in this way by an organization whose work is so essential."

Johnson graduated with a Bachelor of Science in Physics from Imperial College, London, in 1989 and he completed his Ph.D. in Physics at the University of Southampton in 1992.

He is a theoretical physicist and professor at the Department of Physics and Astronomy of the University of Southern California. He previously worked as a postdoctoral researcher at the Kavli Institute for Theoretical Physics at the University of California, Santa Barbara, and at the Institute for Advanced Study, Princeton, and held professorships at the University of Durham, and the University of Kentucky. He received a National Science Foundation CAREER Award in 1997. In 2005 he received the Maxwell Medal and Prize for theoretical physics from the Institute of Physics, "For his outstanding contribution to string theory, quantum gravity and its interface with strongly coupled field theory;in particular for his work on understanding the censorship of singularities, and the thermodynamic properties, of quantum spacetime." In 2005, the Journal of Blacks in Higher Education listed Johnson as the most highly cited black professor of mathematics or a related field at an American university or college. In 2015 he was awarded a Simons Research Fellowship.

His colleagues observe that Johnson "is a truly outstanding scientist and teacher in many respects. His field of expertise is theoretical high energy physics, with an emphasis on string theory, gravity, gauge theory and M-theory. In his current research, he is applying insights gained from mappings between gravity and field theory to tackle some of the most challenging interacting many-body problems. He has authored a very well received textbook on D-branes published in 2003 by Cambridge University Press. In addition to these most remarkable research accomplishments, he is also a very popular and effective instructor. His lectures are most engaging and he has an amazing talent to understand and interact with different audiences, and an extraordinary ability to pitch his explanations at the appropriate level."

Johnson also actively works to promote science to the public and physics outreach. As part of this effort, he has regularly appeared many TV documentary series such as The Universe, Nova, and Horizon and acts as a science consultant for many movies and TV shows such as National Geographic's Genius, about the life and work of Einstein, Marvel's Thor: Ragnarok and Agent Carter (S2), and Star Trek: Discovery. He works with writers, artists, and others to help incorporate science into their work, and he co-directs the Los Angeles Institute for the Humanities. Johnson wrote and drew a non-fiction graphic book about science, The Dialogues: Conversations about the nature of the universe (MIT Press), which was selected by Science Friday as one of the best science books of 2017.