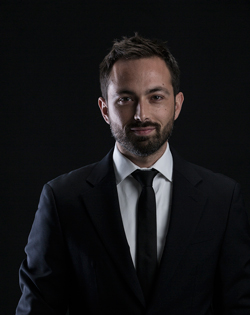 College Park, Maryland, United States, September 2, 2015—The American Association of Physics Teachers (AAPT) announced today that Derek Muller has been selected to receive the 2016 Richtmyer Memorial Lecture Award. Muller is recognized with the award for outstanding contributions to physics and effectively communicating those contributions to physics educators. The award will be presented at a Ceremonial Session of the AAPT Winter Meeting in New Orleans, Louisiana. His topic for the lecture is, Why some confusion is good - Evidence for how to make learners think.

Muller, a physics educator and science communicator, filmmaker, and television personality is best known for creating the YouTube channel Veritasium, which has received over 200 million views on YouTube.

Regarding his selection for this award Muller said, "I am honored to be recognized by the AAPT and delighted to have the opportunity to speak to the talented and dedicated physics educators at the Winter Meeting."

A native of Australia, raised in Canada, he graduated with a B.Sc in Engineering Physics from Queen's University in Ontario. Then he attended the University of Sydney where he completed his Ph.D. in Physics Education Research in 2008 with a thesis, "Designing Effective Multimedia for Physics Education." He began putting his research into practice with his Veritasium YouTube channel in 2011. This quickly led to joining the team of Catalyst, Australia's premiere science TV programme. He has also been featured on the BBC, Discovery Channel, History Channel, and he recently presented a two-part documentary on PBS entitled Uranium: Twisting the Dragon's Tail.

Muller is guided by the great quote by Richard Feynman, "The first principle is that you must not fool yourself, and you are the easiest person to fool." His goal is to help people across the world not fool themselves when it comes to science and how it pertains to their lives.

About the Award
The Richtmyer Memorial Lecture Award is given in memory of Floyd K. Richtmyer, distinguished physicist, teacher, and administrator. Professor Richtmyer was one of the founders of AAPT and served as its president. As a teacher, author, research worker, and dean, he was the guide for many young physicists who became leaders of American science and has had a wide influence on the development of physics in the United States. The award has been given since 1941 to a person who has made outstanding contributions to physics and effectively communicated those contributions to physics educators.The previous recipients of the Richtmyer Award include Sir Michael Berry, Brian Greene, Kathryn Moler, Vera Rubin, Alex Filippenko, Arthur H. Compton, Enrico Fermi, Philip Morrison, and Steven Chu. The complete list of winners can be found at http://www.aapt.org/Programs/awards/richtmyer.cfm.