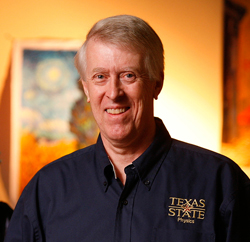 College Park, Maryland, United States, February 19, 2014—The American Association of Physics Teachers (AAPT) announced today that Donald W. Olson is the 2014 recipient of the Klopsteg Memorial Lecture Award. This award recognizes educators who have made notable and creative contributions to the teaching of physics. The lecture and award will be presented during the AAPT Summer Meeting in Minneapolis, MN.

Don Olson is nationally known for his ability to apply physics to solve mysteries in art, history, and literature - and to communicate the results to the public in a coherent, exciting way. His work has been published in more than thirty articles in Sky & Telescope magazine and has been featured in the Smithsonian Magazine, Scientific American, and a host of major newspapers. Olson’s recent book, Celestial Sleuth (Springer, 2014), collects his research in chapters devoted to night sky paintings by Vincent van Gogh, Edward Munch, Claude Monet, and J. M. W. Turner, moonrise photographs by Ansel Adams, events from military history ranging from the Battle of Marathon to moonlight and tides during World War II, and references to celestial phenomena by Chaucer, Shakespeare, Mary Shelley, Walt Whitman, and James Joyce.

Olson earned his B.S. in physics from Michigan State University, receiving upon graduation the Thomas H. Osgood Undergraduate Physics Award - an award named after the professor who was an early editor of the American Journal of Physics and the inspirational teacher in the first physics courses that Olson took at MSU.  After earning his Ph.D. in physics from the University of California-Berkeley, Olson studied galaxies and cosmology for four years at Cornell University and two years at the University of Texas at Austin, and he then began teaching at Texas State University in 1981.  He has received many teaching awards during his career, including the 2011 Presidential Award for Excellence in Teaching, Texas State’s top teaching award.

Olson has been a valuable participant at Texas Section AAPT/APS meetings for many years. He has twice given plenary talks on the use of astronomy and physics to solve mysteries in historical events and in topics from art and literature.

Regarding his selection as 2014 Klopsteg Award recipient, Olson said, “I am deeply honored to receive this recognition, especially because the award commemorates Paul Klopsteg, who dedicated so much of his life to physics education.”

About AAPT
AAPT is an international organization for physics educators, physicists, and industrial scientists—with members worldwide. Dedicated to enhancing the understanding and appreciation of physics through teaching, AAPT provides awards, publications, and programs that encourage teaching practical application of physics principles, support continuing professional development, and reward excellence in physics education. AAPT was founded in 1930 and is headquartered in the American Center for Physics in College Park, Maryland. For more information: Contact Marilyn Gardner, Director of Communications, mgardner@aapt.org, (301)209-3306, (301)209-0845 (Fax)