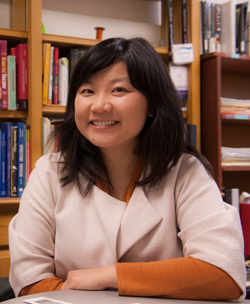 College Park, Maryland, January 24, 2019.—The American Association of Physcs Teachers has announced the appointment of Jiajia Dong, Associate Professor of Physics & Astronomy at Buckell University, as Academic Director of the United States Physics Team Program. Dong earned a BA in English and B.S. in Physics at Shanghai Jiao Tong University, Shanghai, P.R.China in 2003 and a Ph.D.in Physics from Virginia Polytechnic Institute and State University, Blacksburg, Virginia, USA in 2008.

She has been working with the physics team since 2009. Collaborating with a team of dedicated and talented coaches, she finds it particularly rewarding to involve a broader base of high school students in team selection and training. As she embraces the new role of Academic Director, it is her hope that the US Physics Team will continue to challenge the best of the US students and represent the US at the international olympiad stage.

About the Team
The United States Physics Team Program includes recruiting, selecting and training teams each year to compete in the International Physics Olympiad Competition. This selection process begins in late January when high schools register their students to participate in the F=ma exam. Approximately 400 top scorers on this first test advance to the USA Physics Olympiad Exam.

The USA Physics Olympiad Exam is used as the basis for selection of the 20 members of the U.S. Physics Team. These students, from schools all over the United States, travel to the University of Maryland-College Park at the end of May for the annual U.S. Physics Team Training Camp. There they engage in ten days of intense studying, testing and problem solving.

At the end of that training camp, five students are selected for the "Traveling Team." The Traveling Team will return for three additional days of intense laboratory work before they are ready for the International Event. The Interniational Physics Olympiad is a nine-day international competition among pre- university students from more than 60 nations. At the International Physics Olympiad, the competitors are asked to solve challenging theoretical and experimental physics problems.