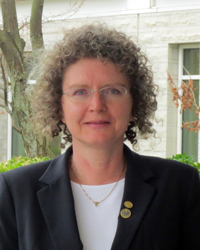 College Park, MD, September 19, 2018—Gay Stewart has been named as the 2019 recipient of the prestigious Hans Christian Oersted Medal, presented by the American Association of Physics Teachers (AAPT). The Medal will be awarded at a Ceremonial Session of the 2019 AAPT Winter Meeting, in Houston Texas. The Oersted Medal recognizes her outstanding, widespread, and lasting impact on the teaching of physics through her pioneering national leadership in physics education, her exceptional service to AAPT, and her mentoring of students and in-service teachers.

Stewart, Eberly Professor of STEM Education and director of the West Virginia University Center for Excellence in STEM Education, is recognized for her outstanding service as a member of the AAPT Executive Board, serving in the presidential chain from 2011 –2015.

Stewart has received recognition from both the physics research and physics education communities for her work in physics teacher preparation and physics education policy generally. She has made significant contributions to the American Physical Society, where she served as a member of the Executive Board, the Council of Representatives and the Forum on Education, as well as the AAPT, where she has served on the Executive Board and as an advisor to the PTRA.

At the University of Arkansas Stewart co-directed one of the first PhysTEC (Physics Teacher Education Coalition) supported sites and oversaw a remarkable rise in the number of certified physics teachers graduating from that institution. She also led the charge to replicate the UTeach program at Arkansas, and continued the replication effort as she moved to West Virginia University. She is the only person to co-cirect UTeach sites at more than one institution.

In addition to millions of dollars in NSF- and HHMI-supported grant funding for physics education research, curriculum, and program development, she has been the PI or Co-PI for several NSF-supported Noyce Scholarship grants for future teachers.

Perhaps the most widespread influence Stewart has had on the physics education community has been in the development of high school physics curriculum and curriculum standards. Her stamp is clearly visible in the AP Physics redesign, an effort she co-chaired. She has also served as a reviewer, test developer, and curriculum developer for AP, as well as an advisor to the College Board. She also participated in the effort to inform the writing of the Next Generation Science Standards on behalf of the physics community. Thus, her vision of reformed physics curriculum has reached high school physics students across the US.

Finally, she is recognized for her role as mentor and advisor to the physics students in her charge and to faculty members in the physics education community, highlighting grant and collaboration opportunities.

In connection with the award, Stewart said, “It doesn’t quite seem real that I have been chosen to receive the Oersted Medal. Oersted has been an example in my classes, and the previous recipients of this award include a spectrum of physics educators who have significantly influenced my work. My family has played a big role in my receiving this recognition, too. My husband John has been my partner in many efforts. Our daughters have been so supportive, making it possible to do it all. There is also my broader family, both my advisees, so many of whom are awesome physics teachers, and my colleagues from years of work on AP who help keep me inspired and get the work done.”

About the Award
The Oersted Medal is named for Hans Christian Oersted (1777-1851), a Danish physicist who, in the course of creating a demonstration for teaching his class, discovered that electric currents cause a magnetic field. This was a crucial step in establishing the theory of electromagnetism so important in building modern technology and modern physics. The award was established by AAPT in 1936 and is given annually to a person who has had outstanding, widespread, and lasting impact on the teaching of physics. Some previous Oersted award winners are John Winston Belcher, Karl Mamola, Dean Zollman, George F. Smoot, Mildred S. Dresselhaus, Carl Wieman, Lillian McDermott, Hans Bethe, Carl E. Sagan, Edward Purcell, and Richard Feynman. The complete list of recipients can be found at http://www.aapt.org/Programs/awards/oersted.cfm.

About AAPT
AAPT is the premier professional society established to advance the greater good through physics education. With the support of members worldwide, AAPT is an action-oriented organization designed to develop, improve, and promote best practices for physics education as part of the global need for qualified Science, Technology, Engineering, and Mathematics teachers who will inspire tomorrow's leaders and decision makers. AAPT was founded in 1930 and is headquartered in the American Center for Physics in College Park, Maryland.