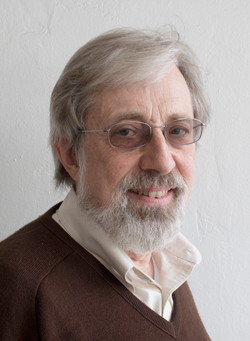 College Park, Maryland, January 9, 2018 —During the 2018 Winter Meeting in San Diego, California, the presidential gavel was presented to Gordon P. Ramsey. He will serve as president of the American Association of Physics Teachers for the coming year. Ramsey, Professor of Physics at Loyola University, Chicago, has previously served on the AAPT Board of Directors as President-elect and Vice President. From 2007-2010 he served at the At-Large Representative for 4-year College Members on the Executive Board.

Regarding his service to AAPT, Ramsey said, "AAPT has helped me to become a better teacher and has assisted in guiding our department to become very successful. It is an honor to serve the AAPT membership and help to further the effectiveness of physics education at all levels and in the global community."

A well-known and respected physics educator, Ramsey holds a B.A. in Physics and Mathematics from Southern Illinois University, Carbondale and a M.S. and Ph.D.in Physics from Illinois Institute of Technology. His broad teaching experience includes the University of Maryland, European Division, Germany, (1974-1977), Illinois Institute of Technology (1980-81), Roosevelt University, (1978-1980) and Loyola University Chicago, where he is currently Professor of Physics. He is also Resident Scientist at Argonne Laboratory where he has worked since 1986.

Ramsey, an AAPT Fellow, has been recognized with the Homer L. Dodge Citation for Distinguished Service to AAPT. He has served the association as Chicago Section Representative, Secretary of Section Representatives, American Journal of Physics (AJP) Editorial Board, AJP Resource Letters and Editorial Board of The Physics Teacher. He has served on multiple committees including: Interests of Senior Physicists;AAPT Representative to US Liaison Committee;Committee on International Education, AAPT Bauder Funding for the "Third Eye" Demonstration Show from China (Guelph), AAPT Nominating Committee, Computers in Physics Committee. Ramsey is also very involved at the local level serving as Vice President and President, Chicago Section and as a member of the Chicago Section Nominating Committee. He holds professional memberships in AAPT, Chicago AAPT, Illinois AAPT, ASA and APS.