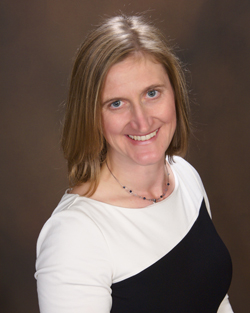 Jodi A. Cooley Named as Recipient of the 2019 Klopsteg Memorial Lecture Award

College Park, Maryland, United States, March 28, 2019—The American Association of Physics Teachers (AAPT) announced today that Jodi A. Cooley, Southern Methodist University (SMU), Dallas, TX, is the 2019 recipient of the Klopsteg Memorial Lecture Award. The lecture and award will be presented during the AAPT Summer Meeting in Provo, Utah.

This award recognizes educators who have made notable and creative contributions to the teaching of physics. Cooley has not only provided the physics department at SMU added diversity from her research, but a great increase in enrollments of students as physics majors and minors due to her uncanny ability to depict and elucidate the importance of physics.

Regarding her selection to receive the 2019 Klopsteg Award Cooley said, "I feel incredibly privileged to be selected for the Klopsteg award. This award is especially meaningful to me because it is given by an organization of educators who value the importance of communicating science to audiences of diverse backgrounds."

Cooley is an Associate Professor of experimental particle physics in the SMU Dedman College of Humanities and Sciences. She received a B.S. degree in Applied Mathematics and Physics from the University of Wisconsin in Milwaukee in 1997. She earned her Masters in 2000 and her Ph.D. in 2003 at the University of Wisconsin - Madison for her research searching for neutrinos from diffuse astronomical sources with the AMANDA-II detector. Upon graduation she did postdoctoral studies at both MIT and Stanford University.

Her career includes many interviews, publications, conference presentations, and talks, including a 2018 Science Friday interview, Dark Matter Eludes Particle Physicists. Cooley is a principal investigator on the Super Cryogenic Dark Matter Search in the Soudan Underground Laboratory in Minnesota; the SNOLAB in Sudbury Canada; and the Assays and Acquisition of Radio-pure Materials Collaboration, whose aim was to develop integrative tools for underground science.

Cooley’s love for teaching and her ability to inspire future physicists extends outside of the classroom, as she mentors a diverse range of postdoctorates, graduate students, and undergraduate students in the LUMINA lab. She continues asking questions, teaching even in the lab, stopping to explain advanced concepts to her younger students whenever their faces start looking confused. In that way, she lives up to the name of her LUMINA lab derived from the word lumen for “light” in Latin. Cooley spends her career illuminating dark matter and illuminating the minds of students. She encourages her more experienced students to work with an undergraduate in order to give them a chance to mentor as well. In that way, she helps build future generations of mentors like herself.

She has won numerous awards for her research, teaching, and mentoring, including an Early Career Award from the National Science Foundation and the Ralph E. Powe Junior Faculty Enhancement Award from the Oak Ridge Associated Universities. In 2018 she was elected a fellow of the American Association for the Advancement of Science (AAAS) for her for contributions to the search for dark matter scattering with nuclei, particularly using cryogenic technologies.