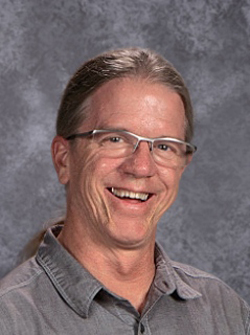 Jon Anderson to be Honored as a 2018 Recipient of the Homer L. Dodge Citation for Distinguished Service to AAPT

"It's an incredible honor to receive this recognition from AAPT. Over the course of my career, my membership in AAPT has provided me with many benefits: excellent professional development, engaging conferences, the opportunity to meet and work with phenomenal colleagues, unique ways to serve my profession, and an enduring sense of community. I am proud that this community has selected me for this award."

As a long-time member of AAPT, Anderson has attended numerous national meetings as both a presenter and a participant. He is currently serving on the Committee on High School Physics, is the new Academic Coordinator for the PhysicsBowl, and was named an AAPT Fellow in the spring of 2017.

Anderson has played a major role in promoting the role of the TIR to the broader physics community, and regularly organizes sessions at AAPT meetings in which TIRs give talks about their work. He has given numerous talks about PhysTEC TIRs at national and regional meetings. His writings have appeared in the APS Forum on Education Newsletter, PhysTEC News, National Science Foundation reports, and the PhysTEC website. He co-authored a peer-reviewed article on TIRs in the PhysTEC book, "Recruiting and Educating Future Physics Teachers," and worked tirelessly to gather and analyze the data on TIR roles and activities featured in the article.

Anderson has been involved in many other aspects of the PhysTEC project, bringing a critical perspective as a high school teacher and teacher educator. He served on panels to review proposals for new PhysTEC sites, provided feedback on subaward agreements with funded sites, and participated as a member of the Project Management Team (PMT). Anderson was also heavily involved in the PhysTEC Noyce project, which provided scholarships for future physics teachers and supported Visiting Master Teachers (VMTs) to mentor the scholars. Jon kept the VMTs connected with each other and with the larger community of TIRs. He also fostered the development of the Noyce scholars as new teachers, helping them get to the Summer AAPT Meeting, organizing in-person and online discussions, and sharing teaching tips and advice.

His service to the PhysTEC project has been invaluable. With his great enthusiasm for the teaching profession, his exceptional talent for mentoring physics educators, and remarkable skill at building professional community, Anderson has made a difference to the national community of physics teacher educators.