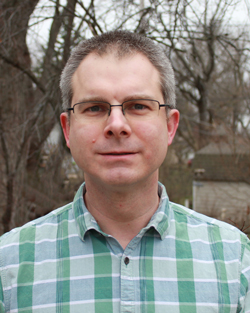 Joseph Kozminski to be Recognized as a 2017 Recipient of the Homer L. Dodge Citation for Distinguished Service to AAPT

When notified of this award, Kozminski said, "I am honored and delighted to have been selected for the Dodge Citation out of the many deserving people who contribute to the AAPT. I'm fortunate to have had the opportunity to be involved in activities aligned with my interests in undergraduate physics teaching and curriculum development, especially in the physics lab."

He began his teaching career as a Teaching Assistant and Research Assistant at Michigan State University. In 2005 he served as Adjunct Professor at Triton College. He joined the faculty of Lewis University later that year and has continued to teach and lead the Physics Department.

He served as Chair of the Lab Goals Subcommittee and took the lead in writing the "AAPT Recommendations for the Undergraduate Physics Laboratory Curriculum" that provides recommendations on developing key skills and competencies that are needed by students. The Guidelines were endorsed by the AAPT Board on November 10, 2014.

A Life Member of AAPT, Kozminski has also provided leadership on a regional level. He has served as president of the Chicago Section of AAPT and is currently serving as Section Representative. He is Chair of the Associated Colleges of the Chicago Area (ACCA) Physics Division and is a member of the Advanced Lab Physics Association (ALPhA) and the American Physical Society (APS).