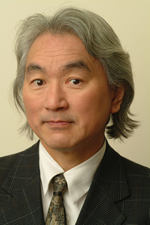 Dr. Michio Kaku, Henry Semat Professor at the
City College of New York, is the 2008 recipient
of the Klopsteg Memorial Award from the American
Association of Physics Teachers (AAPT).  Klopsteg
awardees are chosen for their extraordinary
accomplishments in communicating the excitement
of physics to the general public. The Klopsteg
awardee presents a lecture on a physics topic of
current significance suitable for non-specialists, in
memory of Paul Klopsteg, AAPT Past President.
Dr. Kaku will give his acceptance talk at the 2008
AAPT Summer Meeting in Edmonton, Canada,
entitled, “Physics of the Impossible” on July 21,
2008 at 4 p.m.

Dr. Kaku’s most popular and best selling books include "Hyperspace: A Scientific Odyssey Through Parallel Universes, Time Warps and the Tenth Dimension" and "Visions: How Science Will Revolutionize the 21st Century", which have been widely translated in different languages. His recent book "Parallel Worlds: a Journey Through Creation, Higher Dimensions, and the Future of the Cosmos," was selected as a finalist for the Samuel Johnson Prize for Non-Fiction in the UK.  Dr. Kaku hosts a weekly syndicated radio program, "Explorations in Science.”

Dr. Kaku has become a popular figure in mainstream media, due to his knowledge, as well as his accessible approach to explaining complex physics, quantum mechanics and other topics from a layperson's point of view.  He is the co-creator of string field theory, a branch of string theory. He continues Einstein's search to unite the four fundamental forces of the universe into one unified theory.

AAPT is the leading organization for physics teachers and physics education and provides services that help enhance teaching skills and publishes scholarly journals documenting best teaching practices.  APPT is committed to providing the most current resources and up-to-date research needed to enhance a physics educator's professional development. The results are not only a deeper appreciation of the teaching profession, but most importantly, more enthusiastic involvement from their students.

About AAPT
AAPT is the leading organization for physics educators—with more than 10,000 members worldwide. Our mission is to advance the greater good through physics education. We provide our members with many opportunities for professional development, communication, and student enrichment. We serve the larger community through a variety of programs and publications. AAPT was founded in 1930 and is headquartered in the American Center for Physics in College Park, Maryland.