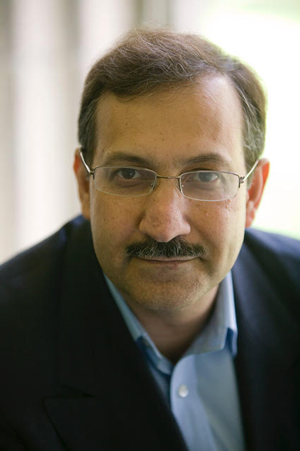 College Park, Maryland, October 10, 2017—The American Association of Physics Teachers (AAPT) announced today that the John David Jackson Excellence in Graduate Physics Education Award for 2018 will be awarded to Mehran Kardar, the Francis Friedman Professor of Physics at the Massachusetts Institute of Technology (MIT).

This prestigious award will be presented to Kardar during a Plenary Session of the 2018 AAPT Winter Meeting in San Diego, California. Kardar was selected to receive the Jackson Award in recognition of his work as a teacher of graduate statistical mechanics. He has written two graduate textbooks in statistical mechanics that are used in many graduate programs. He receives among the very best teaching evaluations of any professor in the MIT Physics Department and his courses draw large crowds. He has received every MIT award for graduate teaching and his students have gone on to become leaders in statistical physics and related fields.

Kardar received his B.A. in Natural Sciences, his M.A. from the University of Cambridge and his Ph.D. from the MIT. From 1983 to 86 he was a Junior Fellow of the Harvard Society of Fellows, and a Visiting Summer Research Collaborator at Brookhaven National Laboratories. In 1986 he joined the MIT Department of Physics as an Assistant Professor. In 1990, he was promoted to Associate Professor of Physics, receiving tenure in 1992 and a full professorship in 1996.

Honors and awards include an Alfred P. Sloan Fellowship (1987–91), a Presidential Young Investigator Award (1989), Guggenheim Fellowship (2001), the MIT Class of 1948 Career Development Chair (1990–92), the MIT Edgerton Award for Junior Faculty Achievements (1991), the Buechner Teaching Prize of the MIT Department of Physics (1992), and the MIT School of Science Prize in Graduate Teaching (1993). He is a fellow of the American Physical Society, as well as the American Academy of Arts and Sciences. In both 1993 and 2008 he was recognized with the MIT-wide award for graduate teaching in which the nomination and selection processes are conducted entirely by students.

Kardar is an outstanding researcher. His famous paper with Parisi and Zhang on the growth of interfaces has over 3500 citations. His excellence in research has always been inseparable from his mentoring of the graduate students whom he has advised, and it has infused his teaching of more than one thousand graduate students who have been inspired by his classes, and in many cases drawn into the research areas that he loves. And, then, there are the many thousands of other students who, through his books, have learned Kardar's perspective on Statistical Mechanics, which both derives from and animates his research.

Kardar's meticulous style of teaching, selfless devotion to his students, and skillful mentorship of graduate research over the past 30 years have inspired a generation of graduate students to modern statistical physics, and transformed the lives of all the graduate students he has mentored. As his disciples mature and flourish in different areas of statistical physics, condensed matter physics, biological physics, and computer science, his style and devotion to graduate physics education are being propagated to all these diverse disciplines.

In their letter of support for his nomination, his students noted, "The success of Professor Kardar's students is testimony to the effectiveness of his efforts in teaching and mentoring. Generations of students from MIT and Harvard will remember his course as the foundation of their understanding of statistical mechanics, and, for many of us, inspiration to enter the field. His Ph.D. advisees owe him a debt of gratitude for his patient and thoughtful efforts on their behalf, and we sincerely believe our own careers could not have been possible without his mentoring."

In accepting the award, Kardar noted, "I am honored by this award on multiple levels: by its association with David Jackson and the illustrious past awardees, by the recognition bestowed through my students and advisees, and by its emphasis on the exquisite discipline of statistical physics."

About the Award
Named in honor of outstanding physicist and teacher, John David Jackson, this award recognizes physicists and physics educators who, like John David Jackson, have made outstanding contributions to curriculum development, mentorship, or classroom teaching in graduate physics education. This award recognizes that great teaching CAN be done and should be expected of great scientists at leading institutions, not only from people whose primary or entire focus is on teaching.

Previous winners of this award are David Pines, Kip Thorne, and Eugene Commins. Additional information about the award is available at http://www.aapt.org/Programs/awards/jackson.cfm.