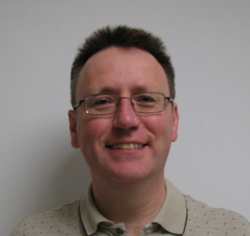 Michael Faleski to be Honored with the 2016 Homer L. Dodge Citation for Distinguished Service to AAPT

Faleski, a Professor of Physics at Delta College, joined AAPT in 1998. He earned his B.S. in Physics at the Rochester Institute of Technology. His M.S. and Ph.D. in physics were from Syracuse University, where he also received a certificate for completing the Future Professoriate Program.

He has been working with the PhysicsBowl for 15 years, originally serving on the committee and becoming the academic coordinator in 2008. One of the challenges he faces is crafting a test that challenges the very top students while not discouraging the majority of students. Each year, over 7,000 students take this 40-question, 45-minute timed, multiple-choice test, and Faleski is responsible for scoring the tests and publishing results in just a few weeks.

In addition to all of these regular duties, he has worked hard to expand the PhysicsBowl in a variety of ways. Since becoming the academic coordinator, he has worked with ASDAN China to permit several hundred Chinese schools to participate in the exam. He has also worked with WebAssign to have PhysicsBowl available online as well as on traditional paper. He served on the AAPT Examinations Editorial board from 2003-2010.

AAPT is an international organization for physics educators, physicists, and industrial scientists—with members worldwide. Dedicated to enhancing the understanding and appreciation of physics through teaching, AAPT provides awards, publications, and programs that encourage teaching practical application of physics principles, support continuing professional development, and reward excellence in physics education. AAPT was founded in 1930 and is headquartered in the American Center for Physics in College Park, Maryland.