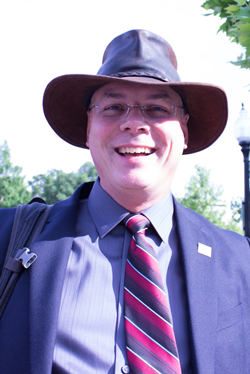 Paul Elliott Stanley to be Honored with the 2017 Homer L. Dodge Citation for Distinguished Service to AAPT

College Park, MD, March 31, 2017—AAPT has announced that Paul E. Stanley will receive the association's Homer L. Dodge Citation for Distinguished Service to AAPT, during the 2017 Summer Meeting in Cincinnati, Ohio. Stanley is Professor of Physics and holder of the Dobson Endowed Professorship in Physics at Beloit College, Beloit, Wisconsin.

Stanley earned his B.S. from Iowa State University and his M.S. and Ph.D. from Oregon State University. Between his B.S. and M.S. he spent a few months in Tennessee working with the Appalachian Service Project. Then, he joined the Peace Corps, and spent the next seven years deep in the South Pacific as a high school teacher.

Stanley began his work with the U.S. Physics Team in 2003 when he became a Coach. He became the team's Academic Director in 2009 and has continued serving in that role. He has been very successful in developing the tests used to identify the top U.S. high school physics students, and in training them to compete in the international physics competition. One measure of his success is the number of medals and special awards that U.S. Physics Team members have earned during International Physics Olympiad; 22 gold, 16 silver, 2 bronze medals and two special awards for achievement over the years that Stanley has lead the Team.

Being Director means much more than just bringing home medals. It also means providing a valuable experience studying physics during a 10 day camp for some of the brightest high school students in the United States. Paul has the right balance of creating a supportive environment and pushing students to do their best. He also has the right disposition for and experience in traveling internationally, particularly to areas of the world that are very different than the U.S. This experience and temperament is invaluable especially traveling with five high school students to the International Physics Olympiad.The Olympiad is a nine-day international competition among pre-university students from more than 80 nations. At the International Physics Olympiad, the competitors are asked to solve challenging theoretical and experimental physics problems.