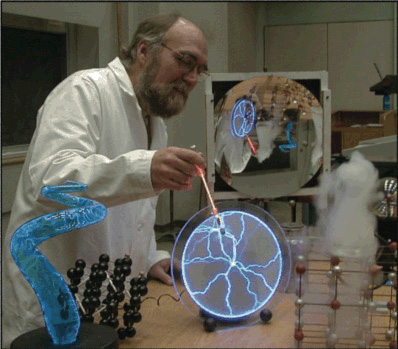 2013 Homer L. Dodge Citation for Distinguished Service to AAPT Will Be Presented to Stanley Micklavzina

A faculty instructor at the University of Oregon Physics Department, Micklavzina has served a very active role in AAPT for many years, organizing sessions, presenting workshops and demonstrations that support his love for physics education.  A member since 1984, he is one of the founders and a Past President of PIRA and has authored several articles for The Physics Teacher.  He has served on the Committee on Science Education for the Public, chairing the committee from 2008-09, and has also served on the Bauder Fund Committee and is again currently serving on both committees.  Notably, he produced and directed the Demonstration Shows at the 2008 AAPT Summer Meeting in Edmonton, Alberta and the 2010 AAPT Summer Meeting in Portland, Oregon.

Micklavzina is publicly known as the engineer of “Science Circus,” an annual event that promotes science to the public.  Designed to entertain and educate community members of all ages, physics concepts are presented and entwined with performance styles that opens the audience’s minds up for a new level of understanding.

His efforts to advance physics education at all pedagogic levels have earned him national and international recognition. International activities include a recent sabatical leave where he designed community and school outreach activities for MAX IV, the National Synchrotron Radiation Laboratory located in Lund, Sweden, and he is also an International Advisor for the Physics Education journal published by the IOP in the United Kingdom.