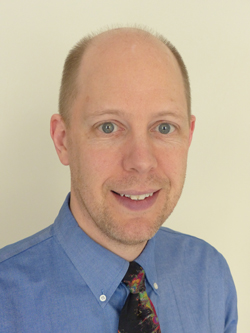 College Park, Maryland, United States, March 27, 2017—The American Association of Physics Teachers (AAPT) announced today that the 2017 Paul Zitzewitz Excellence in K-12 Physics Teaching Award winner is J. Mark Schober, a science teacher at Trinity School in New York City. This award is in recognition for contributions to pre-college physics teaching and awardees are chosen for their extraordinary accomplishments in communicating the excitement of physics to their students.

Regarding his selection for this award Schober said, "I am humbled and honored to be recognized by AAPT with the Paul Zitzewitz Award. I am thankful for every interaction with my teachers, colleagues, and students whose patience, insight, hard work, good humor, and willingness to try things has enabled us all to grow, learn, and have fun in the process."

Schober earned his Bachelor degree in Physics, Mathematics, and Theater Arts at Concordia College in Moorhead, Minnesota, and Master's degrees in Physics and Secondary Education at Miami University in Oxford, Ohio.

Schober began teaching at John Burroughs School in St. Louis where colleagues and mentors from the St. Louis Area Physics Teachers (SLAPT), the Modeling Instruction program, the National Science Teachers Association, and AAPT, inspired his classroom practice and prepared him to lead teacher workshops for each of these organizations. Serving as the webmaster for SLAPT, he also helped to formalize SLAPT's structure to become an AAPT Section. He worked with SLAPT and Six Flags St. Louis to edit and write curriculum and plan logistics for Physics Day. Schober served as President of the American Modeling Teachers Association (AMTA) as the organization grew in its role as the custodian of the Modeling Instruction program. Schober is a founding member and past Chairman of STEMteachersNYC, a grassroots professional development group "by teachers, for teachers, about teaching". Through his involvement with these groups, he has led numerous weekend and multi-week science teaching workshops for teachers across the country.

His colleague noted that "these workshops rank at the top of the professional development I have experienced in my 47 years as a teacher –the electricity and magnetism workshop was so powerful to me that it caused me to completely reformulate my course at my school to conform to the structure of the workshop."

Schober currently teaches at Trinity School in New York City where he served as department head and promoted Trinity's shift to a physics-chemistry-biology sequence. He teaches physics, engineering, and astronomy, and advises a variety of student groups. At Trinity, he uses Modeling Instruction to allow students to use the tools and techniques of science to learn essential science content, and he employs standards-based grading to foster growth mindsets in his students.In addition to this presentation of the Paul W. Zitzewitz Award for Excellence in K-12 Teaching, Schober's teaching has been recognized with the Presidential Award for Excellence in Mathematics and Science Teaching (2007) and the Gene Fuchs Award from the St. Louis Area Physics Teachers (2009).

Established as the Excellence in Pre-College Teaching Award in 1993 then renamed and endowed in 2010 by Paul W. and Barbara S. Zitzewitz, the Paul W. Zitzewitz Award for Excellence in K-12 Physics Teaching recognizes outstanding achievement in teaching pre-college physics.

AAPT is an international organization for physics educators, physicists, and industrial scientists—with members worldwide. Dedicated to enhancing the understanding and appreciation of physics through teaching, AAPT provides awards, publications, and programs that encourage practical application of physics principles, support continuing professional development, and reward excellence in physics education. AAPT was founded in 1930 and is headquartered in the American Center for Physics in College Park, Maryland.For more information: Contact David Wolfe, Director of Communications, dwolfe@aapt.org, (301)209-3322, (301)209-0845 (Fax), www.aapt.org.