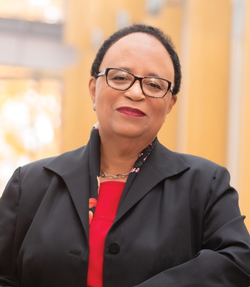 College Park, MD, January 26, 2021—Dr. Shirley Ann Jackson has been named as the 2021 recipient of the prestigious Hans Christian Oersted Medal, presented by the American Association of Physics Teachers (AAPT). The Medal will be awarded at a Ceremonial Session of the 2021 AAPT Summer Meeting. The Oersted Medal recognizes her outstanding, widespread, and lasting impact on the teaching of physics through her pioneering national leadership in physics education, her exceptional service to AAPT, and her mentoring of students and in-service teachers.

Dr. Jackson, President of Rensselaer Polytechnic Institute, is a theoretical physicist.  She has had a distinguished career that includes senior leadership positions in academia, government, industry, and research. She holds an S.B. in Physics, and a Ph.D. in Theoretical Elementary Particle Physics — both from MIT. She is the first African American woman to receive a doctorate from MIT — in any field — and has been a trailblazer throughout her career, including as the first African-American woman to lead a top-ranked research university.

After receiving her degree, Jackson was hired as a research associate in theoretical physics at the Fermi National Accelerator Laboratory, or Fermilab. While at Fermilab, she studied medium to large subatomic particles, specifically hadrons, a subatomic particle with a strong nuclear force. In 1974, after two years with the Fermilab, Jackson served as visiting science associate at the European Organization for Nuclear Research in Switzerland, and worked on theories of strongly interacting elementary particles.

In 1976, Jackson began working on the technical staff for Bell Telephone laboratories in theoretical physics. Her research focused on the electronic properties of ceramic materials in hopes that they could act as superconductors of electric currents. That same year, she was appointed professor of physics at Rutgers University. In 1980, Jackson became the president of the National Society of Black Physicists and in 1985, she began serving as a member of the New Jersey Commission on Science and Technology.

In 1991, Jackson served as a professor at Rutgers while working for AT&T Bell Laboratories in Murray Hill, New Jersey. In 1995, she was appointed by President Clinton to the chair of the Nuclear Regulatory Commission.  In 1997, Jackson led the formation of the International Nuclear Regulators Association. In 1998, she was inducted into the National Women’s Hall of Fame; the following year, she became the eighteenth president of Rensselaer Polytechnic Institute. Jackson remains an advocate for women and minorities in the sciences and, since 2001, has brought needed attention to the "Quiet Crisis" of America’s predicted inability to innovate in the face of a looming scientific workforce shortage.

In 2015, Jackson received the inaugural Alice H. Parker Award from the New Jersey Chamber of Commerce, which honors women leaders in innovation.  In 2016, United States President Barack Obama awarded her the National Medal of Science, the nation's highest honor for contributions in science and engineering.

In 2018, she was awarded the W.E.B. DuBois Medal from the Hutchins Center for African and African American Research at Harvard University. The medal honors those who have made significant contributions to African and African American history and culture, and more broadly, individuals who advocate for intercultural understanding and human rights in an increasingly global and interconnected world.

Jackson was the recipient of the 2019 Burton Award from the Forum on Physics Society “for distinguished application of her knowledge of physics to strengthen the use of nuclear power as Chair of the Nuclear Regulatory Commission, advance education as President of Rensselaer Polytechnic Institute, and render broad service to government, charitable, and corporate board and committees.”

Beth Cunningham, AAPT Executive Officer, noted that “Dr. Jackson has made many contributions to physics and physics education. Her valuable contributions to science have resulted in useful technologies in the telecommunications field. She continues her effort to preserve and strengthen the U.S. national capacity for innovation by advocating for increased support for basic research in science and engineering. She has also advocated for expanding the domestic talent pool by attracting women and members of underrepresented groups into careers in science. She has served the public and the international community through her work at NRC. She has led change at a public research- intensive university.”

About the Award
The Oersted Medal is named for Hans Christian Oersted (1777-1851), a Danish physicist who, in the course of creating a demonstration for teaching his class, discovered that electric currents cause a magnetic field. This was a crucial step in establishing the theory of electromagnetism so important in building modern technology and modern physics. The award was established by AAPT in 1936 and is given annually to a person who has had outstanding, widespread, and lasting impact on the teaching of physics. Some previous Oersted award winners are John Winston Belcher, David Sokoloff, Gay Stewart, George F. Smoot, Mildred S. Dresselhaus, Carl Wieman, Lillian McDermott, Hans Bethe, Carl E. Sagan, Edward Purcell, and Richard Feynman. The complete list of recipients can be found at http://www.aapt.org/Programs/awards/oersted.cfm.

About AAPT
AAPT is the premier professional society established to advance the greater good through physics education. With the support of members worldwide, AAPT is an action-oriented organization designed to develop, improve, and promote best practices for physics education as part of the global need for qualified Science, Technology, Engineering, and Mathematics teachers who will inspire tomorrow's leaders and decision makers. AAPT was founded in 1930 and is headquartered in the American Center for Physics in College Park, Maryland.