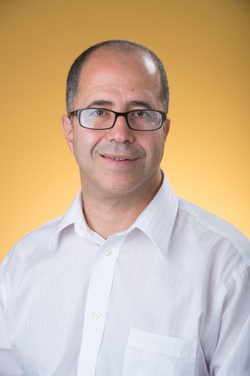 Homer L. Dodge Citation for Distinguished Service to AAPT will be Presented to Taha Mzoughi

College Park, MD, October 16, 2013—AAPT has announced that Taha Mzoughi will receive the association’s Homer L. Dodge Citation for Distinguished Service to AAPT during the 2014 Winter Meeting in Orlando, Florida.

Mzoughi is Professor of Physics at Kennesaw State University.  He earned his Ph.D. in Physics from the University of South Carolina, Columbia in 1990. He is devoted to the cause of physics literacy and has been energetically working in physics education for the last two decades. His experience covers both high school physics teaching and university teaching.

Before moving to the Atlanta Area as a faculty member at Kennesaw State University, he was the co-PI of the National Science Foundation (NSF) funded 'WebTOP' project that involved 3D interactive simulations of optical phenomena at the Mississippi State University.

Taha has been a long time member of AAPT and served as member of the Committee on Educational Technologies, which he chaired in 2010-2011 and the Committee on Research in Physics Education. He worked with ComPADRE for which he helped start The PhysicsSource, the collection for undergraduate physics teaching. He also served in the Mississippi Association of Physicists, the Mississippi section of AAPT. Upon moving to Atlanta he became an integral part of the Southern Atlantic Coast Section-AAPT serving as the webmaster and, most recently as President of this section. He is also very involved with the Metropolitan Atlanta Physics Teacher Group.

He has been the most involved with both pre-service and in-service physics high school teachers and this is, perhaps, the greatest need to promote sustainable physics literacy in our society. He has conducted numerous workshops and professional development opportunities for in-service teachers. Taha has also been instrumental in the NSF funded Noyce Scholarship project and the Masters in Teaching program at Kennesaw State University.

In addition he remains busy with his duties as a faculty member teaching both undergraduate physics and graduate physics education courses. His efforts have impacted many physics students and many in-service K-12 physics teachers.

Regarding his selection to receive this award, he said, “AAPT is a great community to be part of. There are many more deserving of awards at AAPT than there are awards. I am grateful for getting to know them and I am appreciative that they have chosen to recognize me.”