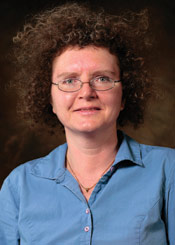 College Park, Maryland, United States, February 8, 2012—The American Association of Physics Teachers announced that Gay Stewart has assumed the role of AAPT President-Elect. Stewart, Professor of Physics at the University of Arkansas, will serve as President in 2013, and Past President in 2014.

Stewart serves a critical role in several NSF funded programs that support AAPT’s mission of training and supporting highly qualified physics educators who are proficient in inquiry-based teaching methods.  She is a site director of the PhysTEC project and Principal Investigator of the College Ready Mathematics and Physics Partnership. She is Co-PI of several other funded initiatives in physics education.

She earned her BS in Physics at the University of Arizona then attended the University of Illinois, Urbana-Champaign where she earned her MS and PhD in Physics. Stewart’s involvement with physics education reform started while she was still a graduate student and has continued throughout her career at the University of Arkansas where she was honored as the Alumni Association’s 2007 Teacher of the year.  Other honors include the University of Arkansas Advising Award, 2006; Honors College Fellowship Advising Gold Medal, 2003; CASE Arkansas Professor of the Year, 2002, Fulbright College Master Teacher, 2002; Fulbright College Outstanding Adviser, 1998; and Fellow, American Physical Society for contributions to physics teaching and physics teacher preparation, 2009.

Regarding her service in this position, Stewart said, “AAPT is an exciting organization with ties to industry, contact with educational policy makers, partnerships with other professional societies and, most importantly, a wealth of enthusiastic members. Together, we can accomplish much.  Using my experience I will work to improve the awareness of AAPT activities across the broader physics faculty at research universities as well as our working relationships with other professional societies with which we share goals and can collaborate to make our efforts more effective. We will do this while maintaining our focus on our primary mission, supporting working teachers in their efforts to enhance the understanding and appreciation of physics through world-class teaching.”

About AAPT: The AAPT is the premier national organization and authority on physics and physical science education — with members in more than 70 countries worldwide. Our mission is to advance the greater good through physics education. We provide our members with many opportunities for professional development, communication, and student enrichment. We serve the larger community through a variety of programs and publications. AAPT was founded in 1930 and is head-quartered in the American Center for Physics in College Park, Maryland.