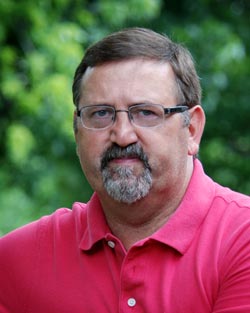 Teaching at a Two Year College (TYC) provides numerous challenges which are totally different than teaching at either a University or a High School setting. These challenges are also a blessing as often times a TYC instructor has the freedom to “experiment” with teaching methods and curriculum. Teaching at Cloud County Community College I have found that I should promote teaching physics which helps direct students toward an individual understanding of the multiple ways to represent their world. By using their own words, pictures, graphs, data, equations, and relationships, we allow them to wonder, discover, question, and solve. Getting them there doesn’t require long boring professorial droning; rather their learning should occur through experiences. My philosophy has been developed because of my many interactions with other AAPT members from the nearly 25 years of attending meetings and working alongside such great teachers and colleagues. In taking the lead from some great TYC mentors like Thomas O’Kuma, Curt Hieggelke, Mary Beth Monroe and others, my current work on the AAPT TYC-New Faculty Experience project, Co-directed by Scott Schultz and myself, we are attempting to promote sustainable change across the Two Year College physics teaching community. My direct work on the AAPT Executive Board can only enhance these efforts. While AAPT has invested in a number of initiatives to better achieve their mission “to enhance the understanding and appreciation of physics through teaching.” these initiatives have been created specifically for Two Year College teachers, by Two Year College teachers, and they are beginning to reach a significant number of instructors at Two Year College institutions nationwide.