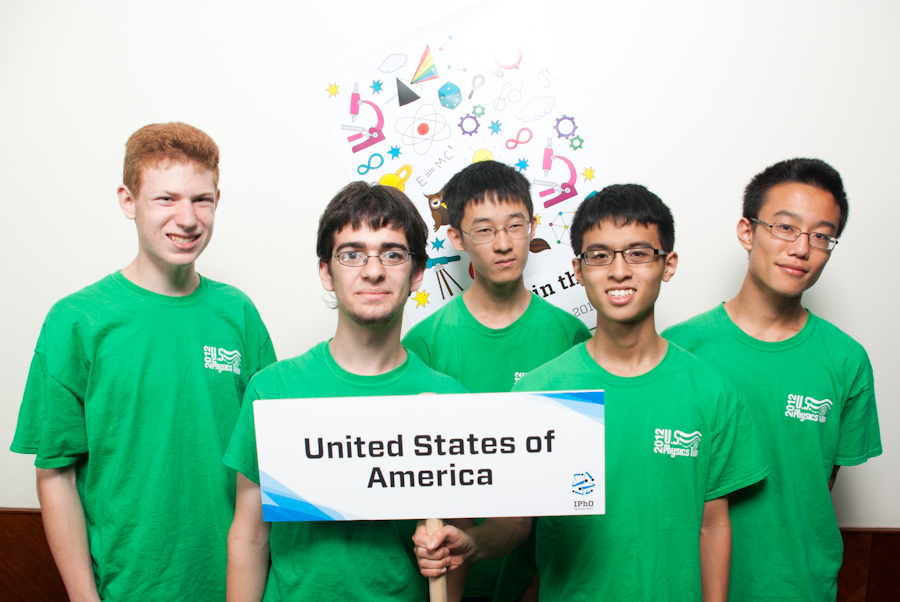 College Park, MD, July 24, 2012—While the eyes of the world were turning to London for the Olympics, physics was in the air in Estonia as America’s best high school physics students participated in the 43rd International Physics Olympiad (IPHO). Teams from 88 countries joined in the 10 day competition.

Estonia was the host of the event, which was held July 15-23, 2012. The Olympiad was held in two locations, the capital Tallinn (team leaders), and the oldest university town in Estonia, Tartu (students). Estonian people and the organizers of the Olympiad provided a unique cultural experience, introducing participants to the innovative country.

International Physics Olympiads aim to propagate “natural and exact sciences amongst school students, stimulating young people's interest in physics, and promoting science education throughout the world by means of international contacts. IPhO is one of the oldest and largest International Science Olympiads: the first Olympiad took place in 1967.”

According to the IPhO statute, each national team will comprise of up to five students and two leaders. The contestants shall be students of general or technical secondary schools; students who have graduated from their school in the year of the competition can be members of the team as long as they have not commenced their university studies.

"AAPT is proud to lead the selection process that identifies such exceptional student scholars. Their outstanding performance in this international competition is a reflection of the work of their coaches, the entire 2012 Physics Team, the support of their families, and the best of physics education,” said Dr. Beth A. Cunningham, Executive Officer of the American Association of Physics Teachers.

U.S. Physics Team Selection
AAPT is responsible for recruiting, selecting and training the U.S. Physics Team each year to compete in the IPHO Competition. This selection process begins in early January when high schools register their students to participate in the Fnet=ma exam. Approximately 300 top scorers on this first test will advance to the Semifinal round of competition.
A second exam is used as the basis for selection of the 20 members of the U.S. Physics Team.  In May these students traveled from schools all over the United States, to the University of Maryland-College Park for the U.S. Physics Team Training Camp. There, they engaged in nine days of intense studying, mystery lab, daily exams, and problem solving.
At the end of that training camp, five students and an alternate were selected as the "Traveling Team" to represent the United States at the IPhO. In July, the Traveling Team and their coaches attended a three day Mini Camp of intense laboratory work before moving on to the IPhO.

Funding and Sponsorship
Funding for the U.S. Physics Team is supported through donations from concerned individuals and organizations.  Contributions are entirely used to support the selection, training, and travel of the team.  Donations to the U.S. Physics Team are accepted at www.aapt.org/physicsteam/donate.cfm.
The U.S. Physics Olympiad Program is a joint initiative of AAPT in partnership with the University of Maryland Physics Department, the Joint Quantum Institute and the member societies of the American Institute for Physics (AIP): Acoustical Society of America, American Association of Physicists in Medicine, American Astronomical Society, American Crystallographic Society, American Geophysical Union, American Physical Society, AVS, Optical Society America, and the Society of Rheology.

About AAPT
AAPT (www.aapt.org) is the premier national organization and authority on physics and physical science education—with members worldwide. Our mission is to advance the greater good through physics teaching. To this end, AAPT provides our members with numerous opportunities for professional development, communication, and student enrichment.