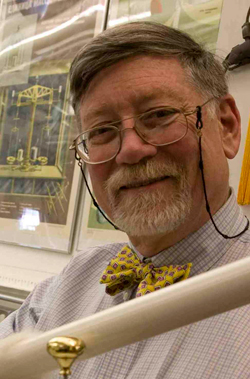 College Park, MD, February 27, 2015—AAPT has announced that Robert A. Morse will receive the Robert A. Millikan Medal during the 2015 Summer Meeting in College Park, MD. This award recognizes educators who have made notable and creative contributions to the teaching of physics.

Morse is Co-Chair of the AP Physics 1 Development Committee and Assistant Editor of the Davidson AP Physics EdX project. He got his B.A. in physics at Cornell University, his M.Ed in Science Education at Boston University, and his Ph.D. in Science Education at the University of Maryland, College Park, MD. He started his career as a physics educator in 1967 as a Physics Teaching Assistant at Massachusetts Institute of Technology. He started teaching high school physics at Masconomet Regional High School in Topsfield, MA where he taught physics, honors physics, AP Physics, Applied Physics, Electronics, Physical Science, and Stagecraft and Lighting.

In 1982 he joined the staff of St. Albans School in Washington, DC, teaching Physics and AP Physics C. He also served as Science Department Chair and Technology Committee Chair. He was trained as an AAPT Physics Teaching Resource Agent in 1985 and has presented or hosted workshops locally and nationally.

A Life Member of AAPT, Morse has served on the Committees on Physics in High Schools, Laboratories, and History and Philosophy of Physics. He is a current member of the AAPT PTRA Oversight Committee and served on the Next Generation Science Standards Review Panel.

He has made many creative contributions to physics education: technology-infused curricula in his own high school classes, curricular modules on electrostatics and Newton's laws distributed by AAPT/PTRA for a broader audience of students and teachers, serving as "master teacher for master teachers" in the early PTRA program, offering innovative workshops for instructors at AAPT meetings, and working over the past 14 years on multiple committees to play a lead role in revising the Advanced Placement (AP) Physics B curriculum and exams. To all these endeavors, he brings passion, inquisitiveness, creativity, and deep understanding of how students learn.