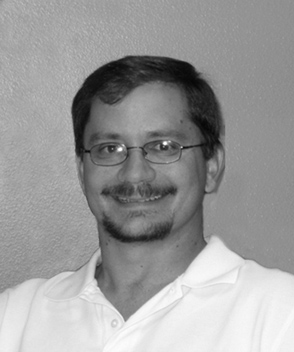 College Park, MD September 30, 2010—The American Association of Physics Teachers has announced the selection of Dwain Desbien, a member of the physics faculty Estrella Mountain Community College, as a recipient of the AAPT Distinguished Service Citation.  These prestigious awards are presented to AAPT members in recognition of their exceptional contributions to AAPT at the national, sectional or local level.

Desbien earned his B.A. in Physics from Grinnell College in 1990, M.S. in Physics from University of Kansas in 1993, and Ph.D. in Physics education from Arizona State University in 2002. His work has been published in The Physics Teacher and he has served as a peer reviewer for this journal and other physics journals.

His work and teaching in physics education is guided by the modeling theory of physics. He is active in running workshops that teach the modeling method.  Desbien is the Co PI on the ATE Project for Physics Faculty (an NFS funded professional development for High School and Two Year College Faculty).   He has presented many workshops for the PTRAs, high school, two-year college, and university groups, both regionally and nationally. Additionally, he has led a number of workshops at national AAPT meetings.

Desbien has served on the Executive Board of the AAPT as the Two Year College Member-at-Large.  In addition he has served on the Nominating Committee, the Two Year College Committee, and currently is on the Undergraduate Education Committee of the AAPT.  He also, is currently serving on the 5-year Review Committee for The Physics Teacher.  At the local level, he has been an active leader of the Arizona Section of AAPT for many years, including a term as the section’s President.