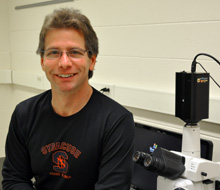 College Park, MD, October 7, 2010—The American Association of Physics Teachers has announced the selection of Sam Sampere, a member of the physics department at Syracuse University, as a recipient of the AAPT Distinguished Service Citation. These prestigious awards are presented to AAPT members in recognition of their exceptional contributions to AAPT at the national, sectional or local level.

He is also a member of PIRA, which includes a term as President from 2005-06, and vice president of the New York State Section AAPT. Additionally, Sampere is Co-organizer of the Syracuse University Saturday Morning High School Physics Teacher Workshops. He was awarded a Physics 2005 Outreach grant.

AAPT is an international organization for physics educators, physicists, and industrial scientists—with more than 10,000 members worldwide. Dedicated to enhancing the understanding and appreciation of physics through teaching, AAPT provides awards, publications, and programs that encourage teaching practical application of physics principles, support continuing professional development, and reward excellence in physics education. AAPT was founded in 1930 and is headquartered in the American Center for Physics in College Park, Maryland.