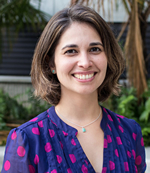 One of the most common questions people ask me is, "How did you get interested in pursuing physics?". It is a question commonly asked not only because we often care to learn about personal stories, but also because people are curious and want to learn more about how a Latina woman became interested in physics, which is not a typical sight in our field. To challenge that specific notion is the reason I continue to pursue physics and teach others, like me, to engage with it. The person I give most of the credit is my high school physics teacher and mentor, David Jones. An inspiration to generations of students, he held so much passion for teaching and physics that his students ended up loving physics too. Mr. Jones did something that every willing student needs; he challenged me to work beyond my limits and believed that I would succeed no matter how difficult or unprepared I was. That positive reinforcement and constant support is what gets women like me through a physics degree. Later, in college, I met other supportive mentors, friends, and colleagues that also cared about diversity and equity in physics. I became a physics graduate student in Physics Education Research (PER), a community whose mission is to improve physics education and make it accessible to all kinds of students. I could not have found a better home.

I am not going to lie, my first AAPT meeting was overwhelming. I was just starting graduate research in PER and I walked into an auditorium full of hundreds of scholars, thinkers, educators, researchers, all inspiring in their own way. I thought myself incapable of even comparing myself to them, scared that I would never be like them. I was relieved and happy when I saw research presentations by Mexican educators. I was excited to introduce myself and use my native language with them. I had written a letter to my mentor at school and told him that I didn’t think I could cut it as a physics education researcher or even teach physics. Yet, after reflecting on all that I had learned at the AAPT conference, the opportunity to share these experiences with educators from all over the country and sometimes with those at an international level, I forgot my insecurities, held the hands of my supportive mentors and peers, and moved forward.   AAPT has become a second home to share issues of diversity, inclusion, and equity with others and actually work towards making a difference. With every single conference that I go to, I come back inspired to continue the hard work to innovate in new ways, to create new activities for the classroom, and to share new messages with students.  I also hope to change the way we think about physics such that my story of being inspired to do physics is not rare, but an everyday common occurrence among Latina women.