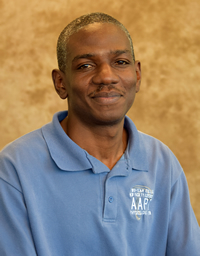 I am an associate professor of physics at Bismarck State College (BSC). In fall 2016, I began my eighth year at BSC. I received a BS in Physics (1995) and Masters in Physics (2001) from Moi University in Kenya and received my PhD. in Physics from University of Texas at Dallas in 2008.

I joined AAPT when I started teaching full-time at the community college in Bismarck. I had known about AAPT from The Physics Teacher journal when I was an undergraduate in Kenya. My initial reason for joining AAPT was to have access to the physics journals and articles. However, I quickly realized that I was getting ideas, tips, and strategies for teaching physics and was now connected to a great community of educators and researchers.

I have been actively involved in my local section and nationally with American Association of Physics Teachers (AAPT). At the local section level I serve as Section Representative of North Dakota AAPT. I recently finished a 3 year term on the AAPT National Committee on Diversity (2013-2016). I currently serve on the national Nominating Committee. I’ve been active in Two Year College AAPT Committee and also Physics Workshops for Two Year Colleges with PIs Tom O’kuma and Dwain Desbien. Currently I am a member of the Partnership for Integration of Computation in Undergraduate Physics (PICUP) community working actively at integrating computation in the undergraduate physics curriculum.

My favorite thing about teaching physics is my interactions with my students and I learn a lot from them. My students don’t come to physics classes totally clueless about the physical world. I like to help students see that their previous physics knowledge is not necessarily faulty but can be tweaked and built upon.  For the last five years my students have worked on end of semester projects involving video analysis of sports, racing, running etc. My students and colleagues at Bismarck State College have also been involved in launching balloons to the edge of space. I enjoy working with my physics colleagues in developing activities for physics students at the introductory level.