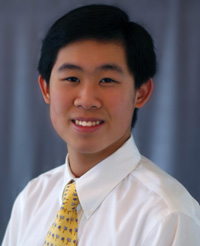 I was born in Michigan, and I've lived here most of my life. Before kindergarten, I wasn't particularly bright; the one thing that fascinated me most was the vacuum cleaner. After I started kindergarten, I got interested in coloring and problem solving. Eventually, I became really interested in multiplying large numbers (like 1294850382) by 2, and was constantly looking for new challenges (such as multiplying large numbers by 3, which I learned shortly after).

I always did well in school and was ahead in math classes, but I didn't participate in any contests until 6th grade MATHCOUNTS. I did not do too well at the competition, but I was inspired by the people in the countdown round -- I marveled at their speed and wanted to be like them, so I began to study for MATHCOUNTS and eventually was able to get 2nd written at the national competition. After that, I got into Olympiad math, and did well enough on the USAMO to make MOP last year.

I've also enjoyed playing piano since I was 5. Currently, I still practice everyday and I compete in competitions and play concerts once in a while.

As for physics, I took my first introductory physics class in 9th grade. While I didn't really obtain a very solid understanding of physics, I became interested in the subject (after doing quite terribly on the first round of the USAPHO that year). In the following summer and year,I made some time to study physics and prepare for the Physics Olympiad exams. I'm happy that I could be part of the team, and I look forward to meeting everyone and learning a lot of physics!